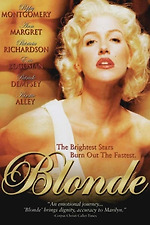 While reading Joyce Carol Oates' "Blonde" (2000), the 738-page novelization of the life of Norma Jean Baker aka Marilyn Monroe, I became interested in watching films that showed MM's more serious roles, including a first viewing of "Don't Bother to Knock" (1952) and a rewatch of "Niagara" (1953). I also watched "The Prince and the Showgirl" (1957) for the first time, and I read up on the actress's three marriages as well as her unsuccessful attempts to give birth to a baby of her own.

Although mainstream America may still think of Monroe as "the most evocative icon of the twentieth century -- the sexy, dumb blonde," she was so much more complex, conflicted, precocious, and confused. Oates takes us deep inside Baker's creation of the Monroe persona and choices that guided her from a fatherless early childhood to womanhood and her ultimate, ill-fated celebrity death. It is a fascinating book, with a twist at end I did not see coming. It is, after all, fiction, and Oates applies her full literary license in describing The Actress's relationship with The Young President. A four-star effort, well worth reading.

Understandably, I was eager see how director Joyce Chopra and screenplay writer Joyce Eliason developed the source material into a 245-minute two-part mini-series for CBS television. And on the whole, I'd say they did a good job translating the core narrative for the screen. But the book offers more than a story. It's an intriguing walk through The Actress's mind, interlaced with interjections of outside perspectives by those who seemed to know her best. Chopra can only approximate this by having Marilyn (Poppy Montgomery) mouth her thoughts out loud, or by using talking-head interviews with her as well as with her mother Gladys Baker (Patricia Richardson), The Playwright (Griffin Dunne), The Baseball Player (Titus Welliver), and others. Unfortunately, the most sinister aspect of the book involves The Sharpshooter, a character eliminated from the script, and although The President is alluded to, he is never seen with anyone.

One high point of Chopra's interpretation was Ann-Margret's performance as Della Monroe, Norma Jean's maternal grandmother and surrogate mom. Another bit of wonderful casting was having Eric Bogosian portray the jaded photographer Otto Ose. Young Norma Jean is played well by Skye McCole Bartusiak, and seeing Niklaus Lange as first husband Bucky Glazer closely suited the image I had of Norma Jean's youthful marriage/divorce. I was less happy with the limited screen time devoted to Marilyn's "Gemini" relationship with Charlie "Cass" Chaplin Jr. (Patrick Dempsey) and "Eddie G" Robinson Jr. (Jensen Ackles). The book made more of their influence on her. And Fleece (Emily Browning), Norma Jean's only friend at the orphanage, has a reduced role, too.

What the book accomplished and the film failed to do was to show The Blonde and her life as emblematic of the mid-20th century American dream, based upon the country's notions of beauty, success, and fame. What's more, because we see the characters as placeholders representing real people (DiMaggio, Miller, Zanuck), the meta-text is missing. Montgomery is playing Norma Jean playing Marilyn Monroe playing Nell Forbes and Rose Loomis and Lorelei Lee and Elsie Marina and so on. There must be layer upon layer of character, and the real woman who inhabits all of these is desperately trying to be seen, to make herself heard, to establish a foundation of self amid crowds of people who seek to mold her in their image... the sexpot... the icon... the dutiful wife... the slut... the blonde. As is so often true, the book is greater than the film, and in this case by a full star. Good enough, and nothing greater.