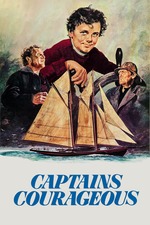 You might not not feel bad when he falls overboard from the huge ocean liner owned by his father (Melvyn Douglas). You might not cheer when he gets pulled out of the sea by the Portuguese fisherman Manuel Fidello (Spencer Tracy). You might applaud when he gets socked up side the head by Captain Disko Troop (Lionel Barrymore). You might hope the clothes don't fit him lent by the captain's son Dan (Mickey Rooney). And you might wish him ill when he sabotages the fishing tackle of Long Jack (John Carradine).

But you are going to fall in love with him as he discovers the meaning of being a man in the world of fishermen. The chemistry Bartholomew has with Tracy, who won the Oscar for his acting here, is nothing short of magical. And director Victor Fleming's adaptation of Rudyard Kipling's novel is nothing short of brilliant. Classic. Masterpiece. See it!