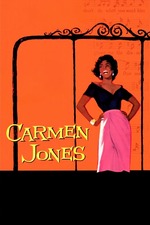 This film directed by Otto Preminger is based upon the 1943 Broadway musical by Oscar Hammerstein II, which was adapted from Georges Bizet's famous 1875 opera "Carmen," which was in turn derived from the 1845 novella "Carmen" by Henri Meilhac. The time and location has been updated to North Carolina during World War II in place of Seville, Spain circa 1820.

First off, what an incredible all-black cast. Harry Belefonte plays Corporal Joe, who's getting set to transfer to flight school; Olga James is his hometown honey Cindy Lou, who's anxious to get married; Pearl Bailey plays Frankie, a club hostess with the desire to do better; and Joe Adams is Husky Miller, contender for heavyweight boxing champion of the world, with Roy Glenn as his manager Rum Daniels. There's also Diahann Carroll as Frankie's friend Myrt, but the superstar here is Dorothy Dandridge as sexy, fickle, ill-fated Carmen Jones.

When Carmen is arrested for interfering with operations at a parachute factory (she sure can stir up men's testosterone), Sergeant Brown (Brock Peters) assigns Joe to take her to civilian authorities. However, she seduces the Corporal and gives him the slip, which lands Joe in military prison. Carmen gets caught, too, but ends up with a suspended sentence.

Upon his release, Joe looks Carmen up to tell he's leaving for pilot training. She protests and insists that he run off with her. Then a fight breaks out over the flirty female with Sergeant Brown, and Joe knows he'll face a court-martial for striking a superior. So instead, he goes AWOL and flees with Carmen to Chicago where her friends, Frankie and Myrt, are hanging out with Husky's boxing entourage.

Carmen soon grows bored of being cooped up in a one-room flat, hiding with Joe from military police. She takes up with Husky, which sends Joe into a jealous rage. This is a tragedy, of course, so it can't turn out well. I was surprised, however, just how true the adaptation was to Bizet's opera, even the music, despite all the changes to make it modern.

Perhaps the biggest claim to fame for this film is that it put Dandridge in the the running for an Oscar as Best Leading Actress, the first time in history an African-American woman had been nominated for that honor. Herschel Burke Gilbert also got an Academy Award nomination for Best Music, Scoring of a Musical Picture, and Preminger was nominated for the Palm d'Or at Cannes. The Golden Globes took the acclaim a step further, selecting this as the Best Motion Picture - Musical/Comedy in 1955.