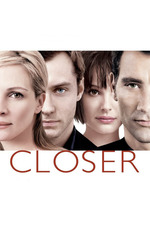 Set in London, the key characters in this mixed up foursome are Dan the writer (Jude Law), Alice the American stripper (Natalie Portman), Anna the American photographer (Julia Roberts) and Larry the dermatologist (Clive Owen). It kind of begs the question, why can't we be content with the good fortune we've found? But there's more to it, of course ... a hot mess of emotions. All four actors are at the top of their game here, with Portman and Owen both winning Golden Globes and getting Oscar nominations for their supporting roles. It's a Michael Nichols film adapted from a Patrick Marber stage play that's well worth watching.