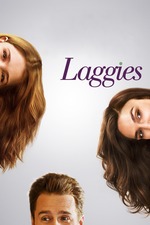 I thought director Lynn Sheldon was a rising star, cutting her teeth on mumblecore and gradually moving up to bigger budget films starring accomplished actors. But if "Laggies" is any indication of where she's going, it looks to me as if she's stuck in second gear and unable to accelerate.

Gone is the rawness that made "Humpday" so much fun. She lost the authenticity of dialog evident in "Your Sister's Sister" when she made her last film, "Touchy Feely," and she hasn't regained it here. And that's sad, because Chloë Grace Moretz as struggling teen Annika and Keira Knightley as conflicted 28-year-old Megan are probably about the best actresses she'll ever have to work with.

The original story by first-time writer Andrea Seigel may be the source of the problems in this tale of a woman who can't seem to find her way in the world of adults. Megan is still jobless after getting her master's degree in marriage counselling. Her own high school friends have moved on -- Danielle (Kirsten deLohr Helland) is married; Savannah (Sara Coates) is too, and having a baby; restaurateur Allison (Ellie Kemper) is about to wed; and Megan's own high school sweetheart, a photographer named Anthony (Mark Webber), has just finally got up the courage to propose to her as well.

But the idea of tying the knot seems to terrify Megan, especially when she sees so many marriages crumbling around her. In fact, she happens to witness her own tax-adviser dad (Jeff Garlin) getting it on with her friend's mother, and it's like the last straw. Megan tries to get some space, ends up meeting Annika and spends a week under false pretenses at the teen's house, where her father (Sam Rockwell) is a divorce lawyer working through his own failed marriage.

In short, there are lots of bad examples of marital relationships here, and not much to look forward to, so when the story takes a slight turn toward hope at the end, it comes off as just another curve in the winding road of relationships, not a path toward success at all. Sheldon has said this is the most tightly scripted film she has done to date. I really hope she lands some better material in the future.