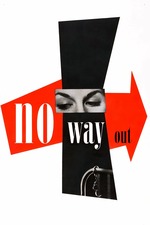 "Ain't no such thing as big worries and little worries. All worries are the same size. Just depends on who's got 'em." ~ Luther's Mother

However, when two brothers, John and Ray Biddle, are brought into the hospital's prison ward with gunshot wounds sustained during a gas station robbery, Dr. Brooks identifies something more seriously wrong with John -- a possible brain tumor. He begins to perform a spinal tap to confirm his suspicions, but John dies before he can complete his work, leading Ray (Richard Widmark) to believe "the nigger doctor killed my brother!"

An autopsy would reveal the truth, but Ray refuses to allow it. Despite being in custody and on crutches recovering from a bullet wound to his leg, the surviving brother manages to stir up a hornet's nest of trouble, involving John's ex-wife Edie (Linda Darnell), a deaf-mute third brother George Biddle (Harry Bellaver), and all the racist hooligans of his rough-and-tumble neighborhood called Beaver Canal. A full-scale race riot ensues.

Writer-director Joseph L. Mankiewicz demonstrated his complete command of film noir here, delivering gritty tension throughout and taking full advantage of the racial fears that prevailed in the mid-20th century. The script earned him an Academy Award nomination for Best Writing, Story and Screenplay. But it is Poitier, of course, who made the big splash, launching a distinguished career and paving the way for all African-American actors to follow.