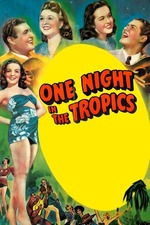 Part of my Filling in the Forties challenge

This 1940 comedy marked the debut of radio celebrities Bud Abbott and Lou Costello working together as a team on the big screen. Directed by A. Edward Sutherland, it was based upon based on Earl Derr Biggers' 1914 novel "Love Insurance" and featured a star-studded cast, with Allan Jones, Robert Cummings, Nancy Kelly, William Frawley and Peggy Moran.

Jim "Lucky" Moore (Jones) is an insurance salesman whose nickname was earned because he "never loses." When arrested for striking a police officer, he sells the judge some reelection insurance and gets his sentence suspended. The, when his buddy Steve Harper (Cummings) says he's going to marry his new fiancée Cynthia Merrick (Kelly), Jim sells him a million-dollar "love insurance policy."

On the other hand, salesman's outlandish contracts are causing high blood pressure to his father, insurance company owner James G. Moore (Richard Carle), who insists that his son get an underwriter for the huge risk. Jim turns to a friend named Roscoe (Frawley), who owns a posh casino club. That's where a couple of pickpockets named Abbott and Costello ply their trade. The boys' jokes here were obviously derived from their radio routines... exactly what post-Depression audiences must have craved.

Steve runs into problems because Cynthia's Aunt Kitty Marblehead (Mary Boland) doesn't like him one bit, and she wants to call off the engagement. But he has an even bigger problem in singer Mickey Fitzgerald (Moran), the girl he dumped for Cynthia. Mickey is by no means ready to let Steve go, and she's quite capable of foul play.

Jim hedges his love insurance bet with Roscoe, but when Mickey comes between Steve and Cynthia. it looks like trouble. Roscoe assigns Abbott and Costello to his "Cupid Patrol" to make sure the marriage comes off, but before we know it they are into an abbreviated version of their famous Baseball Routine, "Who's on first." The rendition was, again, just what audiences of the time must have wanted and expected.

A cruise to San Marcos. Steve's "run in" with Aunt Kitty. More meddling from Mickey. A handsome matador. A bullfight. Plenty of songs like "Back in my Shell" and "You and Your Kiss" sung by Jones. The "dollar a day" gag. The "hot dog" gag. An obvious shift in romantic intentions. The wedding called off?

This really isn't Abbott & Costello's show. Despite their highly praised supporting parts, the film tanked at the box office. However, it did earn the comedians starring roles in a two-picture deal with Universal, starting with the hit "Buck Privates" (1941). The rest, as they say, is history. Fun, short and worth a look.