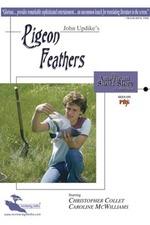 John Updike's title story from his 1962 collection of short fiction, "Pigeon Feathers and Other Stories," gives us a teenager named David Kern, who has recently been uprooted from his boyhood home in Olinger, Pennsylvania. His mother Elsie convinced his father George to move to her own childhood farm near rural Firetown, along with "Granmom," her Parkinson's-afflicted mother, who once grew crops and tended livestock there with David's deceased grandfather.

Feeling the effects of displacement, David turns to the family collection of old books for solace. Two manuscripts, in particular, draw his attention. The first is H.G. Wells' four-volume "The Outline of History," which shocks David with its claim that Jesus was "a political agitator, a kind of hobo" whose crucifixion was a "freakish incident" from which a myth grew and then a church. This appalled and sickened David, who had been brought up in the Lutheran religion, and it caused him to begin questioning the teaching of Christianity, especially regarding the existence of the soul and its survival after death.

The second book was a gift from his mother on his 15th birthday, Grandpa's dogeared, leather-bound Bible. David had only learned of Biblical stories from catechetical classes, and now he became eager to learn the truth by reading the book for himself. However, the gift given to him by his father occupies more of his time--a Remington.22. Only when the boy is told to use the rifle to get rid of pigeons lofting in the barn does he discover his own personal understanding of death and God's role in his personal life. Not a bad read at all.

The film version runs just forty minutes, as adapted by director Sharron Miller for the American Playhouse television series. It features Christopher Collet as David, Caroline McWilliams as Elsie, Jeffrey DeMunn as George, and Lenka Peterson as Grandmom. There's also Boyd Gaines as Reverend Dobson, whose answers to David's serious questions about the soul, heaven, and the resurrection ring hollow and incomplete. Miller injects a slight romantic interest with a girl in David's Bible Study group (Anita Haier in the book, uncredited in the film), but the boy is just too self-absorbed to react to her overtures. I'd say it is a fair rendering of a fair story, if not particularly powerful or memorable. Three stars. Okay.