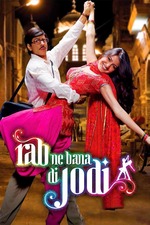 Part of my Bollywood Challenge

I was favorably impressed by writer-director Aditya Chopra's 1995 film debut, "Dilwale Dulhania Le Jayenge," which is considered by many to be his best work. But this romantic comedy has also received its fair share of praise, with a considerably older Shah Rukh Khan once again playing the lead. This time he's 40-ish Surinder "Suri" Sahni, no wealthy, carefree NRI but a "simple, clean hearted, honest man, working for Punjab Power, leading a humdrum life" ... which is about to take huge turn.

The catalyst here is Suri's former professor Mr. Gupta (M.K. Raina). Told initially as a flashback by Suri, we see the teacher introduce his favorite student to his lovely daughter Taani (Anushka Sharma), who is preparing to get married. It seems like a joyous occasion, but then comes the news of a bus accident, killing the groom and all in his party en route to the wedding. Gupta suffers a heart attack. On his death bed, fearing for his daughter's future, he makes Suri and Taani promise to marry each other. So they do, immediately following the funeral.

Things start off badly. Suri makes room for Taani in his cluttered home in Amritsar, but they hardly talk. She's depressed and grieving. He feels like he has no right to disturb her. And when word gets out that Suri has taken a wife, co-workers insist that he throw a big party. That enrages his best buddy, hair stylist Balwinder 'Bobby' Khosla (Vinay Pathak), who can't believe he was the last to know.

Once Bobby knows the truth, he couldn't be more supportive. He helps control the party crowd, and surprisingly the festivities seem to snap Taani out of her funk. The next day, she asks for his forgiveness and patience, as well as his understanding, because she believes she can never love again. Only then does Suri realize he fell for her the first time he saw her. That gets us our first of five musical interludes, "Hauley Hauley Ho Jayega Pyaar," lip-synched by Suri and performed in playback by Sukhwinder Singh.

There is humor in couple's awkward relationship, such as the way they share their meals at opposite ends of a long dining table. But Taani gradually starts to get bored, she decides to take dance lessons for something to do. For his part, Suri wants to make her love him, so he allows Bobby to give him a complete make-over. Mustache gone. Hair moussed. Work clothes traded for jeans and a tee. He goes to the dance class, hoping to surprise her. She fails to recognize him, so he pretends his name is "Raj Kapoor" (borrowed from Ranbir 'Raj' Kapoor, 1924-88, hailed as "the greatest showman in Indian cinema").

Thus begins Suri's double life -- a fake mustache and toupee for home/work and his new look for dance classes. He lies about working overtime so he can attend the lessons. At first his Raj persona comes on too strong and he almost drives Taani away. But his natural charm starts to show, and he begins to make progress emotionally, if not with his footwork, which is awful. For the second musical production, "Phir Milenge Chalte Chalte," we get a full-on song-and-dance number as Taani dreams while falling asleep at the cinema.

It doesn't take long for Suri to tire of the charade. He sees that Taani needs a better dance partner. But when he stops coming to classes, she goes searching for him, which results in their becoming closer. The problems that poses are obvious, so it's time for....

The film resumes with the third musical number, as Raj and Taani practice their dance moves to "Dance Pe Chance," sung by Sunidhi Chauhan and Labh Janjua. The dance class instructors choose the hard-working pair among their top ten sets of partners to represent them in a big dance competition.

An eating contest, a motorcycle chase, shopping for costumes ... with the power to make her laugh, Raj now has center stage in Taani's life, and Suri hardly plays a part. Raj invites her to share his birthday at a temple, a circus and a candle procession in the film's fourth musical number, "Tujh Mein Rab Dikhta Hai." Then, he admits he loves her. And that changes things.

Suri now realizes that he needs Taani to love him for who he is as her husband, slow, steady and reliable, not just the fun-loving, rowdy image he created with Raj. Bobby thinks he's making a mistake not revealing the facade, but he puts it in God's hands. For her part, Taani is totally conflicted. Despite some claims to the contrary, this is certainly not a feminist story.

At a trade fair, Suri tries to impress Taani. He gets in the ring with a sumo wrestler to make her respect him. Some how he survives, winning two free tickets to Japan. But instead of cheering him, Taani walks off. Later, at home, she chastises him for taking such a silly risk, reminding him that he's a white-collar desk jockey, not a hero. She says she's already in his debt, and there's nothing he needs to do for her.

When Suri fails to turn Taani's heart, he let's his alter ego try, and she agrees to run off with Raj. Bobby says he has to come clean, but Suri feels he has failed as husband to make his wife want to stay. She's not happy, so he must give her the freedom she seems to desire. Suri requests a transfer to Delhi.

On the night of the big dance competition, Taani realizes she can't leave Suri. It suddenly comes to her that he was there when she needed him most. He's loyal and dependable, and she believes she has seen God in him. Then comes the shocker. Raj skips out on their big number, and who shows up in his place? Oh yeah, mustache, wig, business attire and all.

That brings the last of the five musical numbers, an instrumental called "Dancing Jodi," interlaced with flashes of scenes past as Taani comes to understand that Raj and Suri are one and the same. Nice choreography. And you may want to shed a tear as Taani admits her failure to sense the depth of his love for her, which she now embraces. Ahh. So sweet.

One aspect I enjoyed throughout the film was the Punjab scenery, especially the gilded Golden Temple, Harmandir Sahib, which seems to float in a sacred lake called Amrit Sarovar. It's said to be "the holiest gurdwara (religious complex) of the Sikh religion." It's simply beautiful, day and night and from every angle. And as the credits run, we get snapshots of Mr. & Mrs. Sahni's "honeymoon in Japan." Very cute.

This film picked up four popular award nominations from the International Indian Film Academy, while gaining eight nominations at the Filmfare Awards, including category wins for Best Playback Singer - Male (Singh) and Best Scene of the Year (presented to producer Yash Chopra). In a stellar year for Bollywood filmmaking, it lost in the Best Film, Best Director and Best Actor categories to "Jodhaa Akbar." It's another keeper from A. Chopra.