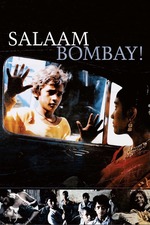 When 12-year-old Krishna aka Chaipau (Shafiq Syed) is abandoned by his mother to life with the circus, he does the best he ca to work hard and save 500 rupees to buy his way back into her good graces. But then the circus deserts him, too, and he takes a train to Bombay, where he gets a job selling tea by the glass for a local merchant called Chacha (Irshad Hashmi).

Over time he becomes friends with a junkie named Chillum (Raghuvir Yadav) and with a young girl called Manju (Hansa Vithal), the daughter of a prostitute named Rekha (Anita Kanwar). The girl and her mother are under the thumb of a drug dealer and pimp called Baba Golum (Nana Patekar). It's a struggle just to stay alive on the Bombay streets, let alone get ahead, but Krishna will do whatever he has to, from cleaning out chicken coops to running errands to earn money.

Among the girls at the brothel where Rekha lives is a new girl, a virgin named Sola Saal (Chanda Sharma), who has been nicknamed "Sweet Sixteen" and is rumored to be worth 10,000 rupees from the first client to deflower her. Krishna tries to befriend her, bringing her biscuits and a baby chick, which makes Manju jealous and Baba angry.

When Krishna gets fired by Chacha, he's only got 250 rupees saved, so to get the rest of the money that he needs, he joins a group of street urchins to rob an old man's house. Meanwhile, Chillum, dying for a fix, steals the boy's stash to buy drugs and ends up overdosing. That leaves Krishna back at square one.

Then, one night while walking home from a job working at a party, Krishna and Manju get picked up by the police and sent to the "Chiller Room," where homeless kids are corralled. The state views the girl as the child of a unfit mother and sentences her to detention until she becomes of age. But Krishna manages to escape and return to the mean streets of Bombay, where he has a confrontation with Baba.

Writer-director Mira Nair dedicated this film to the street orphans of Bombay. It was nominated for an Academy Award as the Best Foreign Language Film and won two prizes at Cannes: the Audience Award and the Golden Camera. It's certainly no feel-good movie, but it does have some powerful impact, highlighting the problems of children abandoned to the urban jungle.

Written on the Wind