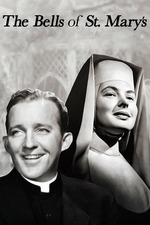 The Bells of St. Mary's

Part of my Top 100 Directors Challenge

I just loved "Going My Way," and I had hoped the sequel might have been nearly as good. After all, it was nominated for eight Academy Awards, including Best Picture. But alas, it's just not at the same level. I think what I missed most were the stirring musical numbers. Nothing here really matched "Swinging on a Star," even though this movie's hit song, "Aren't You Glad You're You," did make the Oscar shortlist.

"I can see you don't know what it means to be up to your neck in nuns." ~ Mrs. Breen

Bing Crosby once again plays Father Chuck O'Malley, assigned by the Catholic Church to save yet another financially ailing institution. This time it is the parochial school of St. Mary's, run by nuns and headed by Sister Mary Benedict (Ingrid Bergman). The school had to sell off land to make repairs on the old building and bring it up to fire code, and now they are all but broke.

The new owner of the disposed property is crotchety Horace P. Bogardus (Henry Travers). He constructs a modern office building on the lot, which the sisters of St. Mary's pray he will someday bequeath to the church. Meanwhile, there are subplots involving the students, including a boy named Eddie Breen, whom Sister Mary Benedict teaches to fight, and a troubled girl named Patsy Gallagher, who comes from a broken home.

Although all the kids are great and Bergman brings Golden Globe-winning talent to her part (one critic called her "the most glowing, knowing, embraceable nun in Hollywood history!"), Der Bingle looks a bit tired of being the pepper-upper and none of the other nuns exhibit any personality at all. In short, the story just lacked the overall depth of character that marked its predecessor and the denouement felt hurried and forced, leaving this otherwise very good follow-up by director Leo McCarey just short of greatness.