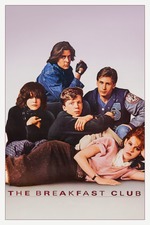 "My God, are we going to be like our parents?" ~ Andrew

Before watching this, I thought it was going to be director John Hughes' do-over for Sixteen Candles. Both focus on high school students in Illinois. Both are set in the 1980s. both star Molly Ringwald and Anthony Michael Hall. My main criticism of the earlier film was that it "went primarily for cheap chuckles" and did not deliver any "anthropological insight into teens of the 1980s." If anything, this film is guilty of the opposite. It's not very funny at all and tries way too hard to be a commentary on parenting and teens of the 80s.

Over the course of eight hours together, the kids gradually open up to each other, learning a lot about themselves and the effects of their behaviors. But it's certainly not because the school planned it that way. Nor does Hughes let us see the teens in action much beyond the day's detention, so we don't really know what lasting changes, if any, might have come about.

Frankly, I disliked the first half of this film quite a bit. It was only after some weed comes into play that things opened up a bit, but the theatrical arc is pretty flat. The script contains homophobic and sexist language, too. And Andrew only takes a serious interest in Allison after Claire "cleans her up" to look more standard. How superficial is that for a movie that seeks to get beyond the surface? This film may have helped launch "the brat pack," but to me it was still just a warm-up for Hughes' best work yet to come.