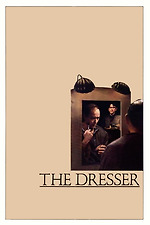 Playwright Ronald Harwood's two-act "The Dresser" played London's West End in 1980 and went on to become one of the most highly acclaimed theatrical productions of the 1981 Broadway season. I borrowed from my library a copy of the original script, published as an 85-page hardbound edition by Grove Press, Inc., which contains none of the changes later made in the New York stage version. In the Foreword by Hardwood, he describes his inspirations for the play, including his five-year acquaintance with the renowned actor Sir Donald Wolfit, CBE, as well as numerous actor-managers and dressers he met in the theatre, who became models for his characters.

Act One opens in the dressing room of the actor-manager referred to as Sir, where his dresser Norman meets with Sir's common-law wife, an actress known as Her Ladyship, and they discuss her husband's situation. Apparently, Sir suffered a breakdown during the afternoon's air raid, tearing off his clothes and running down the street in public. He is currently in hospital under sedation and observation, and both of the troupe members are concerned about the status of this evening's performance of King Lear. They may have to cancel.

A third party soon joins the conversation -- Madge, the Stage Manager. She is in favor of cancelling, as is Her Ladyship, but Norman wants to wait as long as possible to make the decision. Sir has never missed or cancelled a performance in four decades. And as if on cue, just an hour before curtain, Sir himself arrives at the door to his dressing room, albeit not quite ready to perform.

Norman is certain that he can get the great man into costume and all set to go on stage, even if Sir keeps forgetting his opening lines and starts to put on blackface make-up for Othello. With Norman's assistance, he dresses with 15 minutes to spare and even has time to coach a minor player, Geoffrey Thornton as Fool. Others met during preparations include the would-be playwright Mr. Oxenby and the stage hand Irene, whom Sir likes to pat on the rump.

Just as it appears all is in order, minutes before curtain, the air raid sirens go off and bombs begin to fall on London. Sir insists that the play must go on, but it is Norman who is forced to face the audience and give them the option to leave for the air-raid shelters or stay for the show. just as the curtain falls to end Act One.

The action moves to the stage for Act Two. The action switch back and forth between the presentation of "Lear" on stage and the activities of the crew off-stage. Sir misses his entrance. He's also upset by the weakness of the wind and thunder effects for the storm scene. Norman hits his brandy bottle pretty hard on the sly, and the effects of the alcohol begin to show as the act progresses.

During the interval, Sir should be resting, but he is depressed. Norman tries to bolster his spirits, Her Ladyship sits with him darning stockings and reminiscing. She wants him to retire, but he feels it is his duty to carry on the traditions of the Shakespearean past. He laments never having been knighted. He worries about having the strength to pick up and carry the dead Cordelia in the finale of tonight's show, and he considers how small and lightweight the young Irene is. He is feeling his age.

The show goes on, of course, despite a second wave of air raid sirens and bombs falling rather near the theatre. The curtain falls to a very appreciative audience and Sir gets thunderous applause. Afterwards in the dressing room, Norman attends to Sir while cast and crew stop by to congratulate him and say good night. Her Ladyship leaves quickly to wait for Sir at home. Geoffrey puts in a request to have more significant roles on future productions, and Oxenby complains about not being taken seriously about his writing. Only Norman and Madge remain behind as Sire removes his make up, and dies, right there in the dressing room.

It's easy to see that the magic of Harwood's play lies entirely with the talents of whomever plays Norman. It is his life, his devotion, his broken dreams, his steadfastness, his weaknesses, and his loss upon which the success of the entire production depends. For just as the title implies, this isn't about a dying old actor but about a gentleman's gentleman who fills his life with borrowed glory.

It's a sad, bittersweet story. But it's also a great vehicle for a seasoned actor like Tom Courtney, who played Norman in the original West End production as well as on Broadway, winning a Tony Award for Best Actor. No surprise, when Harwood adapted his work for the screen version, Courtney was chosen to take on the film role, too.

"If I can make a film which will get more people to go to the theatre, I will feel I have achieved something. I don't think there has ever been a film which shows just a piece of the theatre's tradition and presents it in an attractive and palatable way. I hope with 'The Dresser' we've changed that." ~ Peter Yates

There probably could not have been a better choice for producing and directing the film version of Harwood's play than Oscar-nominated filmmaker Peter Yates. He was a "Royal Academy of Dramatic Art graduate who had directed plays for the London (Royal Court) and New York (American Place Theatre) stage ... recognized for his ability to communicate on both sides of the camera." And for his cast, he selected "renowned British actors who were distinguished by their work in both the theatre as well as film."

One wonderful aspect of cinema over theater is the ability to show us scenes taking place beyond the confines of the three-wall stage. Yates starts off with Sir's closing scene from "Othello," the train ride to Bradford and Sir at home with Her Ladyship having a nightmare. We also see the rubble in the streets from the bomb raids before Yates takes us to Sir's marketplace hysterics and his hospitalization. Outdoor street scenes add greatly to the sense of place and time. And how can you beat Finney stopping a train with just the sound of his great voice?

It's the mark of great actors that their talent shows through in the silences as well as in the dialogue. As Sir paints his face for Lear and gets angry at Norman for treating him like a child, the two of them spend nearly a full minute alone together saying nothing verbally but speaking volumes in their posing. They are like an old married couple, communicating without speech.

Although I wrote earlier that the success of the story depends on Norman, it's impossible to overlook Finney and the way he dominates scenes. He is pure mastery. And he's great a Lear as well as the actor Sir. He really makes you want to see more Shakespeare ... which was Yates' desired outcome from the offing.

I should mention the LGBT aspects of this film, too. Reading the play, one could get a feel for Norman's closeted love for Sir. There are also references to "nancy boys" in the theater and the arrest of Mr. Davenport is alluded to as an instance of police cracking down on homosexuals. In the film, Norman's effeminate nature is clearly on display and the pain he feels at the end is made more poignant because of it. He never had a chance with Sir, but as he puts it in both the play and the film, "I had a friend."

I was not surprised, therefore, to learn that Courtney and Finney had both been nominated for the Best Actor Oscar. Neither takes a supporting position. The film also gained Academy Award nominations for Best Picture, Best Director (Yates) and Best Writing, Screenplay Based on Material from Another Medium (Harwood). Courtney received a Golden Globe for his acting, while Finney earned a Silver Berlin Bear for his.