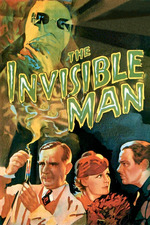 H.G. Wells' 1897 novella springs to life on the big screen in this Universal horror classic from director James Whale. Claude Rains stars as Dr. Jack Griffin aka "The Invisible One," with Gloria Stuart as his romantic interest Flora Cranley, Henry Tavers as her father Dr. Cranley and William Harrigan as lab assistant Dr. Arthur Kemp.

As the story opens, Griffin with his head bandaged and wearing dark glasses, books a room at the Lion's Head Inn in the Sussex village of Iping. Demanding the utmost privacy, he soon turns their sitting room into a laboratory, trying to find a way to reverse the invisibility that his previous experiments have brought upon his entire body.

The innkeepers, Herbert Hall (Forrester Harvey) and his wife Jenny (Una O'Connor), at first put up with Griffin's secrecy and desire for solitude. But when he falls a week behind in his rent, they try to evict him and incur his wrath, injuring Mr. Hall. Police Constable Jaffers (E.E. Clive) is summoned and confronts Griffin, who reacts by revealing his secret and attacking the law officer before escaping into the town streets and wreaking havoc among the residents.

Griffin makes his way to the home of Dr. Kemp, who learned of his colleague's experiments from Dr. Cranley. Kemp provides Griffin with clothing, bandages and dark glasses, before learning of the fugitive's plan to "rule the world" through a "reign of terror." Apparently one side effect of invisibility is megalomania in addition to increased aggressiveness.

Whale's take on the Wells story is a bit tongue-in-cheek, with more than a few chuckle-worthy scenes as the transparent one toys with his would-be captors. A love element has been added, too, by introducing Flora as Griffin's girlfriend -- pure Hollywood fabrication. And purists may also object to the loss of so many supporting characters from the prose version, along with the way the ending has been reinterpreted.

In Venice, this film was nominated for the Mussolini Cup as Best Foreign Film, and Whale won a Special Recommendation. It spawned dozens of sequels and spin-offs, ranging from Universal's own "The Invisible Man Returns" (1940) with Vincent Price to popular TV series in the U.K. (1958-59) and America (1975-76), as well as a six-part British mini-series in 1984. A Johnny Depp version is reportedly currently under development for release as early as 2017.