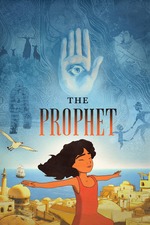 "People of Orphalese, the wind bids me leave you." ~ Almustapha

I first became acquainted with the work of the Lebanese-American author Kahlil Gibran (1883~1931)when I was a sophomore in college in 1970. Like so many other children of the Age of Aquarius, I was enthralled by his spiritual prose-poetry and was a huge fan of his magnus opus, "The Prophet," published in 1923. Then, I had the wonderful good fortune to visit his childhood home in Bsharri, Lebanon in 1972 as part of a study abroad program.

High up in the mountains among the cedars of the Mount Lebanon Mutasarrifate, the house had been turned into a museum, with Gibran's artwork covering the walls and his writing desk situated in a room facing the Mediterranean Sea. I was so inspired by the venue, I bought a copy of his book at the museum store and taped my ticket stub inside the front cover. According to the copyright notice, my hardcover edition from Alfred A. Knopf is the 77th printing, June 1966. Since then, that book has accompanied me to my own homes on three continents, and it is one of the few personal items I would want to grab and take with me in event of a fire.

When I heard in early 2014 that Salma Hayek was producing an animated movie version of the book, I was ecstatic. I continued to keep track of the progress of the film through its in-production preview at the 2014 Cannes Film Festival, followed by its world premiere at the 2014 Toronto International Film Festival. It played several other festivals before it's limited theatrical release in August 2015, but never appeared on more than 35 screens nationwide before fading from cinemas in late September. Unfortunately, none of those screens were closer to me than Los Angeles, some 300 miles away.

So again I was thrilled when my local library indicated they were ordering copies of the DVD this year, and I hastened to become among the first patrons to request a copy on reserve. It arrived just two days ago, and now I'm sitting down to watch it with my 44-year-old copy of Gibran's masterpiece by my side.

"My words are my wings, and you are my messenger." ~ Mustafa

To make the 26 teachings of "The Prophet" accessible, writer-director Roger Allers sets up the story with a widowed mother named Kamila (Hayek) trying to raise her mute daughter Almitra (Quvenzhané Wallis) in the port city of Orphalese. Kamila works as housekeeper for Mustafa (Liam Neeson), a foreign poet, painter and political activist who is under house arrest. In the book version, Almitra is a seeress, and Almustafa is a free man, but literary license must be respected.

When Almitra finally meets Mustafa by skipping school one day, the first of his lessons for her is that of "Freedom," which occurs about midway through the book. Then, he riffs on children, which is the third teaching of the book. Clearly, the various lessons have been rearranged to suit the narrative approach of the film, and that's just fine, as the original structure of the book was Almustafa randomly answering questions from those who had come to see him off, in no particular order anyway.

The film introduces a character called Halim (John Krasinski) as Mustafa's guard, who has a crush on Kamila. There's also a Sergeant (Alfred Molina) among the jailers and a superintendent called Pasha (Frank Langella). Some of the teachings, such as "Love," have been rendered as songs with accompanying visualizations, while others, such as "Good and Evil" and "Death," are spoken almost verbatim from the book.

Gibran's book is so expansive in its scope that, apart from a direct one-man reading, no visualization could do it justice. But this comes close, combining a variety of animation styles from dozens of artists and visual effects specialists. The soundtrack is a plus and, even if the "story" is a bit trite, the thinking shines through. I was happy with what I watched, if not impressed. It's well worth watching.