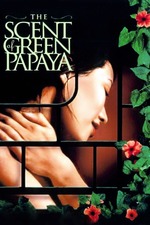 The Scent of Green Papaya

This story begins in Saigon in the summer of 1951. A 10-year-old peasant girl called Mui (Man San Lu) comes to the city to work for a middle-class Vietnamese family consisting of a mother (Thi Loc Truong), a father (Ngoc Trung Tran) and their three sons -- almost grown Trung the eldest (Keo Souvannavong); silent, moody Lam in the middle (Nhat Do); and unruly troublemaker Tin the youngest (Gerard Neth). There's also the paternal grandmother (Thi Hai Vo), who lives upstairs and keeps to herself, praying all the time for the spirits of her dead husband and her granddaughter, Tho.

Directly outside Mui's bedroom window in the large house is a courtyard garden full of papaya trees, which give off a heady fragrance whenever fruit is cut from their branches. In the front of the house is the family's fabrics and sundries shop. A servant named Thu (Vantha Talisman) teaches Mui to cook and clean. She also tells her how little Tho died of an illness seven years earlier and how the master has a habit of occasionally disappearing with all of the family money to go on a bender.

Writer-director Tran Anh Hung arranged for all of the filming to be conducted on a sound stage at the Studios de Bry in France. The sets are quite elaborate, replicating the rain forest look of Old Saigon as well as extensive interiors. However, there's a certain artificiality to to the sets -- almost too perfectly decorated -- and the sound department went a bit overboard with background noise ranging from birds and insects to temple bells, planes passing overhead, distant strains of music being practiced and the curfew siren sounding each night.

Fast forward ten years. The master is dead. The grandmother is dead. The mistress has aged badly. Lam has left home to become a writer, while Trung has married and become the head of household with his wife running the shop. Now age 20, Mui (Tran Nu Yên-Khê) must leave the family and go to work for Trung's friend, a wealthy young pianist named Khuyen (Hoa Hoi Vuong).

Although Khuyen has a fiancée named Mai (Thi Thanh Tra Nguyen), it's hard for him not to notice how lovely Mui has become. When Mai discovers she is not foremost in his heart, she breaks off the engagement (and a few vases). This leaves Khuyen free to pursue Mui, although first he must teach her to read and write and carry herself like a proper lady.

At Cannes, Tran won the Golden Camera and the French Film Award of the Youth for this production. The movie was also nominated for Best Foreign Language Film at the Academy Awards. But frankly, I don't see how a film set in Saigon during 1951-61 could almost completely ignore Vietnam's intense political situation and escalating war. It's almost surreal -- beautiful and dreamlike -- not at all like anything you might expect.