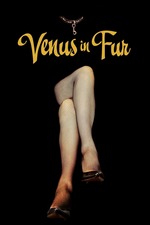 Now past 80 years of age, director Roman Polanski is still looking for challenges, so he picked out this two-character drama by David Ives to adapt to the screen. Of interest, the 2010 play was based on a novel by Austrian author Leopold von Sacher-Masoch, which was first made into a movie in 1967 by director Joseph Marzano. And yes, the term "masochism" derives from the novelist's name.

In interviews, Polanski has said this film is a comedy, which only shows how his sense of humor is pretty far outside the mainstream. Mathieu Amalric plays a director named Thomas Novacheck, who is bent on adapting the 1870 von Sacher-Masoch novel for the stage. He has just finished conducting 30+ auditions for an actress to fill the role of Wanda von Dunayev aka Aphrodite, who takes Severin von Kusiemski as her love slave in a contracted sado-masochistic relationship.

This reminded me a bit of Polanski's "Carnage" (2011), which was also based on a play and filmed on a closed set (a simulated New York apartment) with just four actors. The good folks at Cannes nominated this film for the Palme d'Or, while France's César Awards bestowed their Best Director prize on the Polish filmmaker.