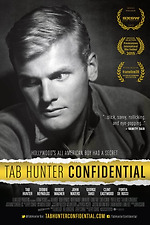 Tab Hunter, the 'heart-throb,' all-American beauty of the fifties, speaks about his (to a certain extent) secret homosexuality, the creation of his famous persona, and self-acceptance when he finally left the movie industry and withdrew from the limelight with his lover, the producer of this documentary, who is thirty years younger.

In hindsight, it is immensely ironic that this object of so many girls' (and guys') fantasy and the symbol of the perfect American male beauty (his perfect facial features, beautiful blond hair, his open and childlike smile), which led his admirers to give him also all the cliched qualities of the American honesty and 'goodness,' was a homosexual who ended up working with John Waters in 'Polyester' and having a scorching scene with the drag queen Divine.

It is amazing to see that the man called Tab Hunter is much more real and even more attractive now, at the venerable age of eighty something. There's something classy and even noble in this old man who loves to ride horses and avoids watching his old films when they are shown on TV. His movie career belongs to another person.

Of course it's not the first time (and won't be the last either) that we watch an old actor doing his final coming out on camera, but I guess Tab Hunter's movie career coincided with such a crucial moment of American history and culture that his persona, which the studios created and he tried so hard to preserve (his infinite 'dates' with famous actresses; his fake flirting with his female admirers; the innumerable photos on magazines showing off his handsome smile), that his artistic success and demise acquire a special value.

There was something missing in his perfect young handsomeness, something impossible to pin down, but "Tab Hunter" (what a comical name if you think about it now) was unquestionably beautiful and yet not very 'magical.' He embodied a perfect type and in this perfection also lies his major flaw. He was not a great actor, I am sorry to say.

His love story with Anthony Perkins is the most poignant part of this documentary. Perkins, who hid his homosexuality, married, had children, and died of Aids.

Two things will stay with me: Tab Hunter's relationship with his mentally ill German mother, who went through an intensive electroshock therapy; and his return to fame when he became a parody of himself, working with John Waters and Divine.

I perceive a certain magic, real magic in the persistence of this old man, who shed the skin of a false, misleading fantasy in order to acquire the magic of his real identity. I honestly felt I was given the chance to look at something who was at once real and magical, exactly because the first part of the film had insisted on his problematic career as the perfect American idol.