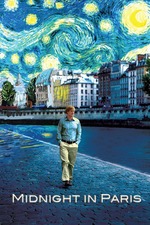 Only rarely has Owen Wilson either captivated or impressed me. The first time was early in his career, when he played against-type as a serial killer in the excellent indie film, 'The Minus Man', and the second time was here, as unfortunately he comes across as not acting at all, just portraying the same persona over and over again, in nauseating fashion. I was frustrated when my mom bought each of her two grandchildren, one past Christmas, tons of battery-operated products from the animated film, 'Cars', as I had to keep hearing his voice, as Lightning McQueen (I tend to shy away from getting toys with lots of noise, as I wanted different kinds of quieter experiences for my son, Julian, and the approach worked, and thankfully he decided to leave the toys there, to play with when he visited her). But while most people concentrate on Woody Allen the writer, or the actor, he is also an excellent director, and tends to get outstanding performances out of people we didn't think would be otherwise capable of such an experience (think of Andrew Dice Clay's wonderful work in the more recent 'Blue Jasmine').

I was fortunate enough to visit Paris on my own, at 17, back in 1986 (as it was basically to visit Jim Morrison's grave, I wrote about it in my review of 'The Doors'), and though I was a bit young to experience the romantic magic of the City of Light (and was incredibly pissed off to be visiting the great city right in the midst of a railway labour strike, which interrupted my overnight sleeper-car journey from Berne, Switzerland to switch trains FOUR times, in the dead of a wintery night), I could feel that intangible charm and happiness walking through the extraordinary city. I can see how it could possibly bring out the best in everyone, even Owen Wilson. The time-travel idea was inspired genius, one of Woody's best ideas in years, and the supporting cast, particularly in the 1920's scenes, was incredible, especially Kathy Bates, Adrien Brody, Marion Cotillard and Léa Seydoux.

The film's easily Woody's best work in eons, and it won one of its four Oscar nominations: his third in 16 times nominated for Best Screenplay. He lost in Best Director (though he's won one of his seven nominations there) to Michel Hazanavicius for 'The Artist'; while 'Hugo' took Best Art Direction and 'The Artist' also took Best Picture. It's definitely worth a watch, for any self-respecting cinephile of sophisticated American romantic comedies, and is worth a purchase and re-watches if you're particularly charmed by Allen's work. It's easily one of his best and most accessible pictures.