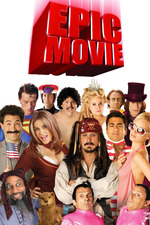 more to come on the podcast patreon soon, but until then:

who knew in 2007 that just two years after eating shit in epic movie that kal penn would become a member of the obama administration?

there is a fluid mania to these 2000’s spoof movies that keeps them constantly moving. they are never boring but, more often than not, they are noxious, unfunny and one dimensional. sometimes it is charming to watch something so unapologetically lazy and stupid. and a few of the bits do actually land but usually because it’s a talented comic performer (fred willard) slumming it and elevating the material.

spoofs have become a fetish object of mine recently, probably because i’m finally fulfilling the desire i had to watch these flicks in middle school. but they are fascinating cultural artifacts. they were dated the moment they were released and anyone without the low brow pop cultural context of the 2000’s would find them even more incomprehensible. hurricane katrina, flavor flav, brangelina, paris hilton, & mtv cribs are all subjects for comic fodder.

i think that thru observing these bleak pieces of cultural ephemera it is possible to gain a better understanding of woke capitalism. a lot of the jokes in epic movie are rooted in homophobia, sexism, and racism. this is not a value judgment on “problematic” humor. but rather it makes clear the transparent shift that has occurred within the ten or twelve years since these movies were released. hollywood has denounced this type of frat bro juvenilia because it has stopped making money and have moved on to woke posturing. obviously the advancement of progressive social values is something worth celebrating, though it obscures the abuse and manipulation that still takes place at the core of the hollywood system. it is harder to swallow the disingenuous feminism of things like captain marvel because you know the same greedy sex criminals and abusers that are responsible for those films do not believe what they’re selling. while i’m sure that the execs also felt like peddling parodies was simply a different kind of slop for the masses, at least the epic movies are more honest about the cruelty and exploitation that those in power gleefully delight in.

i would take a thousand more of these mean-spirited & ideologically vacant pieces of trash than the 20 different booksmarts we’re going to get over the next eight years.