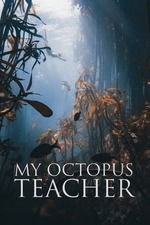 For the first five minutes or so, my assumption that this was a fake movie felt incredibly on-point, with wannabe Werner Herzog-ian narration fake philosophizing on the relationship between man and beast and how they have the power to change each other's perspectives. But then the damn thing cast its hypnotic spell on me and by the end I got choked up. It's so much cliché, but it WORKS, goddammit.

It's gonna be a LONG damn time before I eat calamari again.