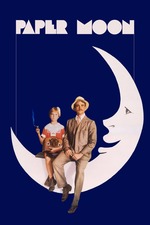 The following is the ‘Paper Moon’ excerpt from an article examining John Ford’s influence on Peter Bogdanovich.

Among The Movie Brats, there was a tremendous amount of John Ford adulation (Scorsese, Spielberg, Schrader and John Milius) and then there was Peter Bogdanovich.
For one, Bogdanovich’s Ford influence extended beyond The Searchers. Peter was a true student of Ford’s filmography. And it was both his writings on and his friendship with the man, as well as many other old pros like Hawks & Hitchcock, that helped Peter break into the business. Yet unlike his other Ford loving contemporaries, Scorsese and Spielberg, he doesn’t pay homage to the one-eyed old man by having characters watch Ford’s films. Even when that would be easy to do, like The Last Picture Show (that honor he reserves for Hawks). Bogdanovich and his then wife, Polly Platt, would spend time on the old man’s sets, including a wonderful piece Peter would write for Esquire on the set of Ford’s late-career apologia Cheyenne Autumn (which is where the couple would meet their friend Sal Mineo, who would later give Peter the novel of The Last Picture Show). Bogdanovich would direct for the American Film Institute a tribute documentary about the old man titled Directed By John Ford, which would get amusing mileage from Bogdanovich, including the irascible old helmer’s smartass answers to the puckishly young pups questions.

PETER: Mr. Ford, you made a picture called Three Bad Men. You had quite an elaborate land rush in it. How’d you shoot that?

FORD: With a camera.

But despite popular critical consensus during Bogdanovich’s most active career period, I reject that there’s an overt Ford influence on his filmography.

The two films most commonly thought of as being Ford-influenced are The Last Picture Show & Paper Moon. So let’s examine those two examples.

Link to THE LAST PICTURE SHOW

Where’s Ford in that?

Since when did Ford represent the thirties? He didn’t even represent the thirties in the thirties, Frank Capra did. Yes, of course, he did The Gapes of Wrath. But I don’t see a connection, other than sharing the same era, between The Grapes of Wrath and Paper Moon. What does a small comedy about a bible selling conman and his little girl sidekick have to do with a Hollywoodized adaptation of a John Steinbeck social drama?
Ford wasn’t known for comedies, he did a few, but he wasn’t known for them (Donovan’s Reef is his most Fordian comedy hit). Nor did the comedies Ford did share the same sense of humor as Paper Moon.

The story concerns Moses Pray (Ryan O’Neal), a traveling bible salesman who preys on vulnerable widows to ply his trade (he convinces them the Bible was purchased by their late spouse). As he breezes through a town in Kansas, he stops off to pay his respects at the funeral of a former Paramore, only to find her nine-year-old daughter Addie Loggins (Tatum O’Neal, Ryan’s real-life daughter).
O’Neal’s Moses is enlisted to ferry the young child to the bus station and put her on a bus to St. Joe Missouri to live with her aunt. But that plan gets scrapped when little Addie proves a cute little tyke can aid and assist in the conning of lonely widows.
So after an initial bout of antagonism, Moses realizes he’s finally met his grifter match in Addie. Then Peter’s film becomes a chronicling of their shady adventures throughout the dust bowl of the American Midwest.

A neat trick that Bogdanovich pulls off in Paper Moon is the film manages to be very heartwarming without ever (really) being sentimental. There’s a very sentimental, heart-tugging and even sappy movie running all through Paper Moon.
But it’s a subtextual movie. The audience wants this movie to be sentimental. So whatever they want these two characters to feel for each other, the audience projects those feelings onto them. But in the actual movie, the characters are pretty stoic. And they never really break that stoicism.

Do they really love each other?

But what they really love is the give and take of their grifter partnership. They love how good they are at it. He loves his routine and she loves having a routine. She loves being treated like an adult in their nefarious activities, and he loves not having to treat her like a child. Like Bogdanovich’s two earlier films, The Last Picture Show and What’s Up, Doc?, Paper Moon felt like an instant classic the day it was released. But while The Last Picture Show looked like a George Stevens prestige fifties film and What’s Up Doc? looked like a screwball comedy done in bold primary colors, Paper Moon doesn’t look like a movie from the thirties. Instead, it looks like Ryan O’Neal’s Moses Pray is driving his jalopy through a series of Depression-era photographs. The American depression era is more convincingly depicted in Paper Moon than it ever was in the thirties, or in any other thirties-set seventies film (The Day of the Locust, Bound for Glory, Chinatown, F.I.S.T., The Sting, Movie Movie or Pennies from Heaven).

And for all the critics (and a jealous Orson Wells) who tried to tie Paper Moon’s attributes to The Grapes of Wrath, in every instance Bogdanovich betters his elder. The beauty attached to László Kovács’ black and white photography was somehow linked to Ford. Now Ford’s photography has always been overrated in my estimation. But I think it’s pretty obvious his color films look better than his black and white films (The Man Who Shot Liberty Valance has all the artistry of watching a Technicolor western on black and white television). After the discovery of Tatum O’Neal, Paper Moon’s biggest distinction is it’s one of the best cast movies ever made (casting by Gary Chason). No fiction movie has ever captured the faces of the people you see stare back at you from thirties photographs with both the accuracy and poignancy of the actors in Paper Moon. Not Bound for Glory, definitely not Chinatown, certainly not The Sting, and least of all Grapes of Wrath. Ford’s Hollywoodized novel adaptation is filled with great magnificent faces (Fonda, Darwell, Carradine) as well. But they are the faces of actors. Every person who opens their front door to find Ryan O’Neal’s bible salesman’s insincere smile on their front porch seems like a true humanity representative of the time. With the lawman lover of the Widow Bates (Ed Reed) “Hold on one damn minute,” delivering in one scene ending line, one of the most heartbreaking moments ever concealed inside a comedy, “If it’ll make that woman happy, I’ll buy it.” Talk about ’a piece of time.’

And for all the cinematic virtuousness of some of the other seventies movie brats, especially when compared to Bogdanovich, the single greatest long take of their cinematic collective isn’t any of DePalma’s over hill and under dale Steadicam and crane combinations, or even Scorsese’s magnificent and witty tour through the Copacabana leading up to Henny Youngman in Goodfellas (though that’s pretty spectacular, as is the crane that ends up behind the bucket of blood in Carrie).
For me, it’s the car mount single take two-shot of Ryan O’Neal’s driving Moses Pray and overall-wearing, shotgun-riding tyke Tatum O’Neal’s Addie Loggins, as they bicker, fight, break-up and then, finally, get back together (“I guess we’ll just hafta’ keep on veerin”).

Spielberg, Scorsese, Schrader and Milius all quoted Ford or reworked thematic ideas or story points more than Bogdanovich ever did (Hawks is a different story). But critics of his day used Peter’s devotion to his elders as a way to delegitimize the young man’s talent (in a way they never did to the amateurish Truffaut).
“Over twenty years after the fact, in an interview for Andrew Yule’s book on him, Picture Shows, Bogdanovich reflected:
“Truth to tell, it started because of me. Although for years I never wanted to discuss it, because I couldn’t figure out why I’d been so anxious to give away credit. When people asked me about Targets, I said it was my homage to Hitchcock, then I said The Last Picture Show was influenced by The Magnificent Ambersons. In What’s Up Doc? I called Ryan “Howard” in a tip of the hat to Hawks. I got myself in that hole simply because I felt bad working when all those old directors I knew were judged virtually unemployable. Just about everybody I met was at the end of their careers and I felt tremendously in debt to all of them. And I wanted to return the favor. It got to be so ridiculous that even a good critic like Vincent Canby said in his review of Paper Moon that it was my homage to Shirley Temple!”
Bogdanovich explained incredulously, “When people asked me why I shot The Last Picture Show in black and white and I said Orson Wells told me to, they really thought I meant that! Orson certainly encouraged the idea, but I can’t say I did it because he told me to… that whole way of looking at my stuff was confused by my genuine admiration for the older directors. And why shouldn’t I say so? They’d created the art form, and the industry, after all.”

Now maybe Bogdanovich didn’t do overt John Ford homages in the two films people insinuate he did, like he did with Hawks or DePalma did with Hitchcock, but that doesn’t mean he didn’t want to. Originally, The Last Picture Show author Larry McMurtry had an idea for a big cattle drive movie, that after the success of their Last collaboration they could do together. Peter loved the material and wanted to do it with John Ford’s three biggest leading men: John Wayne, James Stewart and Henry Fonda. Fonda, whose career was at a low ebb all through the seventies, liked the idea. But neither Wayne nor Stewart responded to the material. And since neither man could be persuaded to come aboard, Bogdanovich put the project on the shelf.
Years later McMurtry bought back the rites to the material and turned it into the Pulitzer prize-winning novel Lonesome Dove, which was later turned into a massively successful mini-series in the eighties. It starred Robert Duvall in the James Stewart role, Tommy Lee Jones in the John Wayne role, and I suppose Robert Urich in the Henry Fonda role. Now, this is a clear case of Bogdanovich being blinded by his Ford admiration. And, frankly, one can only be grateful it fell apart, since (no doubt) Cybill Sheppard would have played the Diane Lane role. Imagine the scene in the mini-series where Duvall and Lane talking about ‘pokin’ with a Cheyenne Social Club-era Jimmy Stewart! No wonder Stewart turned it down. Bogdanovich might have been suffering from Ford dementia but, apparently, Jimmy Stewart wasn’t.
When Peter had his hands on material like Lonesome Dove, he put it on the shelf rather than cast it correctly? How about Steve McQueen in the Jones role, Warren Oates in the Duvall role and Jeff Bridges in the Urich role? Or Gene Hackman in the Jones role, James Coburn in the Duvall role and Joe Don Baker in the Urich role? Or McQueen, Coburn and David Carradine? All western icons, all age-appropriate and all better casting then Peter’s over-the-hill gang.