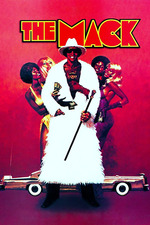 Even though Martin Scorsese decided to turn down exploitation assignments from Roger Corman he wasn’t completely divorced from him. After being prompted by John Cassavetes to quit Corman and do something personal – “Don’t you have anything you want to do?” – Scorsese said, “Yes I got something. But it’s not ready it needs a rewrite.” “Well what are you waiting for, rewrite it!”, Cassavetes prompted. So along with Mardik Martin, Scorsese conceived the script that would turn out to be Mean Streets. And when Scorsese was finished, his first stop was Roger Corman (he probably used the Xerox machines at New World to make the copies). Roger read the script and responded, but with a Corman caveat.
Roger’s brother Gene had just produced a successful picture at MGM titled Cool Breeze, where they took John Huston’s The Asphalt Jungle and remade it with black characters (MGM and George Armitage would do the same thing with Mike Hodge’s Get Carter turning it into Hit Man with Bernie Casey). So Roger’s brainwave du jour was turning white crime films into black crime films. Roger says, “If you’re willing to swing a little and make it black, I’ll give you 150,000, you can shoot it in New York.” When I asked Scorsese about Corman’s offer, he told me he told Roger, “Let me think about it, meaning I really said no, but even then I said let me think about it.”
When I pressed him, “did you contemplate it,” he told me, “Well I said let me think about it, knowing in the frontal -whatever- lobe of my brain was saying absolutely out of the question. I said hold on a second, but I realized there was no way I could do it black. There’s no way.”
Again I pressed, “You never considered what black actor you would’ve cast as Charlie, for instance?”
“No.” Marty replied flatly. Continuing, “There was nothing – I just couldn’t do it. I could not make the leap.”
Now if Scorsese just wanted to make a good gangster story, he could’ve made the leap. But the gangster aspect was just the genre the film fell in, not the reason he wanted to make it (for instance I could’ve done a black Reservoir Dogs. I wouldn’t have put a black guy amongst those guys. But I could’ve made the whole team black). Scorsese wanted to make a movie that showed New York Italian-Americans as they were. As he (Scorsese) knew them. So if twenty years from now, people want to know what the guys he grew up with were like, they could watch Mean Streets. And if it came into town and opened and closed like a lot of small movies did at that time (Dealing, The Christian Licorice Store, Been Down So Long It Looks Like Up To Me), then he could go back to Roger Corman and make Women in Prison Films.
So okay, Scorsese didn’t consider it. But…I’m going to consider it. He bends a little, accepts Corman’s offer and turns Mean Streets black. What would that movie be?
Imagining Mean Streets without the Italian-American milieu is like imagining a white Sounder. I mean, you can imagine it, but it does seem beside the point. You don’t watch either one of those two movies for the story. Losing the people and the social fabric feels like you’ve lost the movie. And once you break it down to simply the story minus the milieu, you realize you’ve seen that movie before.
And besides, there already was a “Black” Mean Streets (like there was a “Black” Shampoo) done in the very same year.

And while Campus’ film didn’t receive a rave review from Pauline Kael in The New Yorker or make Vincent Canby’s top ten list of the year in The New York Times (however Ralph Bakshi’s Heavy Traffic did), it performed far better at the box office than did Mean Streets and for the audience it was made for, proved every bit as iconic if not more so.
Shaft, Superfly and Uptown Saturday Night had more mainstream success. Slaughter had better action. Coffy and Brotherhood of Death were more fun. But even including its flaws, The Mack is the best and most memorable crime picture of the whole blaxploitation genre. Like Mean Streets did with its posse of Little Italy hustlers, The Mack takes the viewer on a tour of a closed-to-the public subculture.
In the case of the Campus picture, the pimping game in Oakland California. Along with actor Max Julien, the real auteur of The Mack was screenwriter Bobby Poole (who wrote the script to star himself). Poole takes Ben Hecht’s script for Scarface and reworks it from Chicago bootleggers in the thirties to Oakland procurers in the seventies. The film tells the tale of Goldie (a fantastic Max Julien), an ex-con who through the mentorship of two individuals on opposite ends of the trade is introduced to the Mackin’ game and how it’s played. One, a blind pimp known as The Blind Man (Paul Harris expertly channeling Iceberg Slim) and two, a former-friend, current working girl Lulu (Carol Speed). The film follows his violent bloody rise to the Top of the Heap (another title from that time period). Along with Julien the film is filled with terrific actors, Richard Pryor, Roger E. Mosley, Dick Anthony Williams, William Watson, George Murdock and not-so-terrific ones like Steve McQueen’s pal Don Gordon. The picture contains dialogue so memorable (“You’ll have so much money, it’ll look like your pockets got a case of the mumps.” “Shut the fuck up when grown folks are talkin’.”), that four different generations of black men have been quoting it for the last forty years. Visceral lurid violence (“Stick yourself!”) that has the snap of a Holloway House trash paperback (Where’s the Donald Goines novelization?). Its predatory pimp psychology is presented as Jungian philosophy (“Anybody can control a bitch’s body, but a mack can control a bitche’s mind.”). And like Ron O’Neal’s pusher hero Priest in Superfly both his lawlessness and his opportunism, usually at the expense of his own community, is presented as a nonconformity. Real-life Oakland pimps and pushers like Frank ’a man’ Ward and his brothers hang out in the corners of the frame, and in the hilarious barbershop sequence take center stage. The producers made a deal with Frank Ward (the one real true king of Oakland crime) that opened up the production to all the authentic bars, barbershops and nightspots that give the picture its documentary-like verisimilitude. And the actors playing the pimps, Julien as Goldie, Pryor as Speed and Dick Anthony Williams as Pretty Tony stand up remarkably well to the real thing (the biggest difference is the actors are more handsome and have better diction). Despite the fact the film’s story is taken whole from Scarface and a dozen other rise-and-fall gangster sagas, both the milieu and subject matter contain such a new-to-the-movies vitality (especially in 1973) that the familiarity with the structure helps more than it hurts. You don’t have to guess what’s going on or why Goldie does what he does. You may have never been in this world before, but you’ve seen this story before. Almost every character is an afro-centric variation on a white archetype from thirties gangster stories. Juanita (Imitation of Life) Moore is the Baptist version of the long-suffering Italian or Jewish mother of the protagonist who acts as the son’s conscience. Don Gordon and William Watson are the white racist version of the crooked cops out to bring down the tragic hero. Roger E. Mosley plays the black nationalist version of the hero’s priest brother in a Warner Brothers movie. The familiarity keeps you grounded. But Bobby Poole uses our familiarity with the story to pull off the film’s biggest surprise. Unlike Scarface, Cagney in The Roaring Twenties or The Rise and Fall of Legs Diamond, Goldie doesn’t fall. He ascends to a triumphant freeze-frame finish after being crowned Mack of the Year.

In Mean Streets Harvey Keitel’s Charlie toes the line with his uncle mob boss Giovanni (Cesare Danova) and Johnny Boy (Robert De Niro) gets a bullet in the neck for crossing that line. Both Scarfaces (Tony Camonte & Tony Montana) meet bullet-riddled finales.
But Bobby Poole’s Goldie blows up his rivals (Pretty Tony), offs the mob boss (George Murdock), kills the cops (Gordon & Watson) and even makes The Man in Oakland Frank Ward come in second for Mack of the Year at The Players Ball.

By the time The Mack would open theatrically Frank Ward would be dead.

Maybe Goldie did that too?