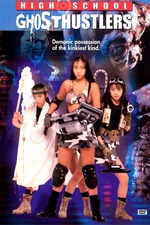 High School Girls, Ghosts, penis monsters, live action hentai, Japan, if you like that stuff, here is a movie containing it. It’s campy trash, but it’s somewhat fun. And with three Japanese Models as main characters, it has plenty of eye candy to cover the boring stretches. After a slow opening, quickly interswitched with a high school girl jumping to her death, and then Kyoko is bungee jumping while Mayu and Emi sit talking. They are members of the Supernatural Phenomenon Research Club at their school. Their club is sponsored by Mr Shimada, who tells Emi, Kyoko, and Mayu that people this was part of a series of suicides and people are talking about the school being cursed, and he wants the girls to investigate. Of the girls, Kyoko is most interested in supernatural phenomenon because she wishes to see her dead grandmother again. Emi is the daughter of some sort of monk that performs exorcisms, and has some psychic powers. Mayu is basically there to fall down and ghosts to catch, and uses a ghost detector that looks like a toy gun. But the brave Mr. Shimada now has three high school girls wandering around an empty high school at midnight knowing that many high school girls have recently killed themselves. Around 12:30, they hear piano music, which turns out to be the weird janitor. As Kyoko and Emi go to the bathroom, Mayu gets attacked by scissors which cut off part of her clothes (oh, the horror :P). It is, naturally, the weird janitor, and Kyoko and Emi show up to help, and the Janitor tries to hypnotize Kyoko to kill herself, but she just beats the crap out of him. And he was responsible for the other girls’ deaths, so now the trio are heroines.