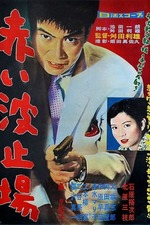 It’s Nikkatsu Action time again! The film genre is so consistently entertaining that it will be a constant reoccurring theme here (or at least the films that have gotten releases on digital media are the entertaining ones, as there are piles of films that still don’t seem to have any sort of legitimate release even with 20 years of cinephiles screaming about it. But we work with what we got, and what we got is Akai Hatoba, aka Red Pier, but also known as Crimson Harvest as well as a few other titles. It’s supposedly a reworking of a French film called Pepe le Moko, but everyone who claims this also mentions they haven’t seen that film, and I’m afraid I have to add myself to that total, so who knows? What I do know is director Toshio Masuda revisited this story a few years later with Velvet Hustler in glorious color. But this is the OG yakuza on a pier outwitting his enemies while also being in love with a lady whose brother he helped kill film.