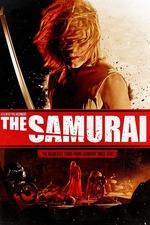 One of those only-at-a-film-festival experiences; I can't see this ever getting wide American release, given its wild experimental luridness and frank male sexuality. A policeman confronts a sword-wielding, dress-wearing wild man who runs roughshod over a small town; the attacker, credited only as "the samurai," seems more like something out of a nightmare than like a real person. Possibly he represents the cop's secret sexuality, possibly he's a werewolf, possibly he's just a representation of id, and regardless, he's intimidating and fascinating, largely thanks to Pit Bukowski's intense performance, which makes him believable as something otherworldly. Reminiscent of The Company Of Wolves and even more so, The Passion Of Darkly Noon in its gushy, violent delirium.