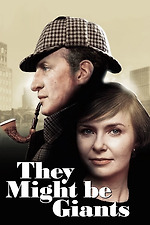 Kinda charming, pretty messy, and generally enjoyable adventure around New York City in the 1970s, as a paranoid schizophrenic who believes he's Sherlock Holmes chases clues around town, while the psychiatrist tasked with committing him for nefarious reasons (Dr. Watson, of course) chases him in turn. Surely this was a major inspiration for Terry Gilliam's The Fisher King? Its take on damaged souls comforting each other in a sometimes-indifferent city, and connecting with a larger group of outcasts and secret rebels, feels very familiar. And the read-it-as-you-like ending — the part of the film that feels most like the stage play this once was — also has a bit of Gilliam to it, in its take on the role of fantasy in the world. George C. Scott is a real charmer in this one. Joanne Woodward — well, I wish she wasn't one in a pretty much infinite cinematic series of lady professionals who gets so caught up in romance that she's profoundly, criminally unprofessional. This could use more of a resolution for some of its key plotlines, but it's valuable viewing both for the entertainment value, and for the chance to see Times Square captured in the act of turning into a sleazy dive area.