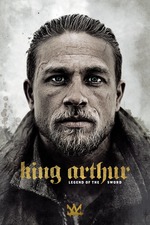 This film is a frustrating one. There are three conflicting elements to this film that we constantly cut between and only two of them would make for a completely satisfying and strong film.

Briefly, before I get to those, which are the core of the film's problems. There are other issues here. There isn't a single female character with dimension here. There's a few too many diversions that feel thrown in or underexplained (perhaps by overediting). And the overall narrative is a little slight on Jude Law's end. He does what he can with a paper thin role, which is why when he goes to the lengths his character goes to, I was struck wondering about his motivations and inner character. He plays a generic evil king but I couldn't stop trying to figure out what he was even getting out of any of this because Law plays him with conviction and because he goes to some dark places.

But that's all detailing compared to the big ones. The three conflicting styles.

First, there's the style that opens the film in an extended cold open. A medieval epic fantasy war film, something along the lines of LotR. It's all very serious and dark and cinematic and there's nothing really wrong with that. I don't know how exciting it would be as a whole film purely for how inherently derivative that genre of film is becoming. Apparently that's the film Ritchie originally wanted to make. He wanted to get outside his comfort zone and make a big serious sword battle film. And when that's the film we are presented with, it's fine. It's handsomely directed, if a little rushed.

Then, there's Ritchie's trademark quick fire, fast cut, snap zooms and odd angles, smart ass, fun action film with a modern flair and off the cuff sense of humour. It's what was originally advertised in the initial trailers and it's exactly what I wanted. There really couldn't be a more inappropriate time period or genre for Ritchie's trademark sensibility than this but it looked like he knew exactly what he was doing, and it looked like a fresh fun take. And it is. Every time we get one of those sequences, cut to either a Sherlock Holmes esque cue or the pitter patter rhythmic breathing cue from the trailers, it's so great. Hunnam gets to show off some great comic timing, the editing is tight and crisp, and the jokes and sight gags and cut laughs all work extremely well. According to Hunnam, this is the movie that just kind of came together unintentionally. It seems Ritchie kind of fell back into his old habits, which is only disappointing because I wanted more and every cut back to the Lord of the Rings style film was so jarring and unpleasant.

The last element is the only one that really doesn't work, and it's an odd, frustrating design choice for whoever made it. The fight scenes (the ones not done in the first two styles--which are both great) involving the sword are video game boss battles. When Arthur takes the sword in both hands it's literally a power up type of thing and it's awful. Hunnam is replaced with CGI as he takes out all the CGI adversaries. And it goes on way too long and is just rough to watch.

It seems like he could have just done a hyper sped up version of his usual action scene editing to the point that it's nearly incomprehensible and we would have gotten the same point in a more consistent and more intelligent way. I bet people would have still hated it because people seem to hate Ritchie being Ritchie, but it would have been the ideal way to go.

I'll say this. I wish there was going to be a sequel. But I wish it was going to be the fun smartass movie with modern camerawork and crazy editing that we only get here for about 40-50% of the film. There's no way in hell this film makes any money, but that was always going to be true. No matter who directed it and what the final product looked like, I don't think a King Arthur movie is the sort of thing to galvanize the masses.

Regardless, the way it ended is melancholy only because it's clearly setting up the possibility of more adventures without leaving any hanging threads, but they are never going to happen.

This gets a 3.5/5 because I view a 3/5 as a perfectly average film with nothing special or memorable. A 4/5 is a great movie with flaws too big to ignore. So this is a 3.5 because I will remember some of the Ritchiest scenes. They will stick, and by the time this comes out on blu ray I will convince myself to buy it having blown up those scenes and minimized the flaws. It should be more and if the editing and vision were consistent this would be a very different conversation.