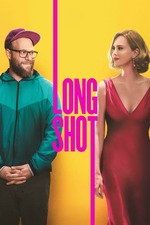 I really just appreciate the Seth Rogen stamp that he puts on films he has a hand in shepherding.  That specific brand of good people trying to do good things with fairly low stakes or very silly high stakes.  Plotted films that get a lot of narrative work in while feeling like lackadaisical hang out movies.  He loves to laugh at himself and let us laugh along with him and he has no problem letting the people he shares the screen with run the show and take the spotlight.  If we’re revitalizing the romantic comedy genre in 2019, Rogen is one of the voices I want at the summit.

I was rewatching When Harry Met Sally... recently with someone (we still haven’t finished it though) and I still stand by it as a mountaintop rom com but like so many others in the genre it revolves around a kind of terrible guy laying down the law for how terrible and toxic all men are.  That film challenges that character and forces him to reconsider his idiotic beliefs but the majority of films in the genre do not.  And the end result is generations of people growing up aspiring to be assholes in romance or believing they have to be to not die alone.

Even when his characters are flawed or outright terrible people, Rogen is always a guy actively learning in a way you can’t misconstrue.  And here, he’s just a good person.  Which is okay too.  Charlize Theron is a good person too.  And that’s great.  The obstacles keeping them apart are monumental enough without one of them hating on the other for half the film.  The pacing of this thing is also really fun.  We spend a LOT of time building the friendship and bond of these two before it tips firmly into romantic territory and the foundation that creates is ironclad.

It also has to be said that Charlize Theron is so much fun in this.  She has done a fair amount of comedic work in the past but this is the funniest and most enjoyable she has been to watch in possibly any of them.  She gets to actually show off what she can do without compromise.  She gets to be the strong woman character AND the idiot goofing around with Seth Rogen.  Shockingly, it’s not mutually exclusive.

What a gift.  I haven’t had time to watch almost anything in the month of May and what I have seen has been wildly frustrating, insane, or disappointing.  So it was nice to run out to the theatre on a quiet rainy day with a fun person and hide away in the cathedral and just laugh and get caught up in the lovely romance Levine, Sterling, Hannah, Rogen, and Theron concocted between the five of them.