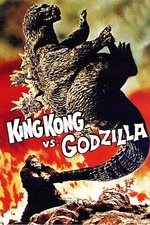 Godzilla and Friends Marathon: 9 of 46
Ranking the King (Kong, that is)

While Godzilla Raids Again foreshadowed what this franchise would become for the latter part of the Shōwa period, it is King Kong vs. Godzilla that fully ushers in the era of Rock 'Em Sock 'Em Kaiju. If Godzilla was made to cash in on the popularity of the King Kong re-release, and if Mothra was a subtle homage to King Kong, then this was Ishirō Honda finally going all-in and just flat out remaking King Kong, while also tossing Godzilla into the mix.

You see, Willis O'Brien, the stop motion animator who brought Kong to life, was looking to make a comeback in the early 60s and wrote a treatment for King Kong meets Frankenstein, where Kong would fight an equally large version of the Frankenstein monster. Eventually, fearing that Universal held the rights to the name Frankenstein, the title was changed to King Kong vs. the Ginko. Now, here's where I'm a little torn about how this turned out. I'm a fan of O'Brien's work on the original King Kong, and I'm also a lifelong fan of anything Frankenstein-related, so I really would have liked to see this proposed film. If that had happened, however, then we never would have got this outrageously fun version from Toho. So, just how did Toho end up making Willis O'Brien's movie? Well, the producer that O'Brien shopped the idea to, John Beck, sold it to Toho instead, who replaced the Frankenstein monster with Godzilla. The rest, as they say, is history.

Now, as for the film itself, I've seen a lot of negative reviews for this one. I suspect many of them are due to watching the Americanized version. I also suspect that more than a few are a result of watching this with suboptimal picture quality. Or, it is possible that some people just can't handle the tonal departure from the previous films. This is more of a comedy/adventure and, as such, doesn't take itself as seriously as films like the original Godzilla. With that said, however, if you're willing to go along for the ride, this is an absolute blast. This thing is 97 minutes of wall-to-wall fun. I was smiling from ear to ear for the entire runtime. In fact, I'm already looking forward to watching this one again.