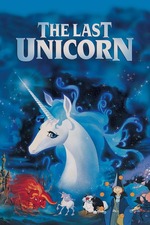 "There are no happy endings because nothing ends."
- Schmendrick the Magician

So, I can't say for sure, but I can only imagine that this is one of those films that is appreciated far more by those who watched, spellbound, at a young age. I'm sure that if your first experience with this was as an adult, you'd probably dismiss it as some generic, Disney knockoff looking, fairy tale relic from the early 80s. But who knows, maybe your experience would be every bit as magical as it was for me, watching it on LaserDisk for the first time, in the mid 80s. All I can say with certainty, is that every time I revisit this film, as an adult, it still possess the power to melt my cold, black heart.

"She will remember your heart when men are fairy tales in books written by rabbits. Of all unicorns, she is the only one who knows what regret is - and love."
- Schmendrick the Magician

This time around, King Haggard kind of reminded me of film critics, or critics of any artistic medium. A bitter, jaded old man who was once struck by the majestic beauty of unicorns, as they exist in their natural habitat, free and unspoiled by the taint of man. However, as he becomes focused on recapturing this moment, to the point that nothing else brings him any joy, he eventually has all of the unicorns rounded up and forced into the sea, so he can watch them as the tide comes in. But he's still a bitter, crotchety, old curmudgeon. It doesn't really bring him the joy he had hoped for, because he failed to understand that the raw emotion of that initial encounter cannot be forced. When removed from that experience, it loses its power. This is akin to the cold, sterile analysis of films stripping them of the raw power, and the emotional impact, that make one a film lover in the first place. Art is all about evoking a subjective emotional response in the beholder. But, when the critic performs an autopsy on a work of art, cutting into it with a scalpel, dissecting it and peeling back the layers, the art is irrevocably destroyed in the process. The critic, in this manner, has lost the ability to just experience it on a purely emotional level. To connect with the art. They are so focused on the intellectual act of analysis, that they miss the point of art.

To truly appreciate art, one must avoid succumbing to the analytical side of oneself and, instead, try to cultivate a child-like mindset. Try to experience and connect with art on an emotional level. Feel it in your gut, and in your heart, rather than pick it apart in your mind.

Anyway, this is a magical film. Turn off the analytical part of your brain for a bit, and try to watch it as if you were a kid again. Just let it do its thing, without trying to dissect it, and maybe you can experience that magic for yourself.