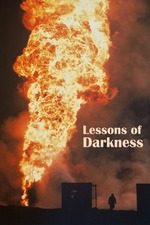 Absolutely riveting. The use of archival footage stripped of context, reupholstered with the occasional blurb of fictional semi-narration—e.g. ”has life without fire become unbearable for them?”—makes the world nearly unrecognizable, mutating it into an apocalyptic wasteland: A literal hell on earth. Herzog’s approach is caustic, conjugating visual decimation with aural rhapsody—scanning along whole villages in ruin and peering at a sky blackened with plumes of smoke while Grieg, Pärt, Verdi, Wagner et al orchestrate in the background—to dizzying effect, almost Machiavellian in the way it sharply incises while beautifying things that we know shouldn’t be traditionally “beautiful” under any circumstances. But there are no circumstances, here: Humans are reduced to a voiceless amalgamation of self-destruction and madness, painful irony mined from the futile extinguishing efforts - a measly stream of water spewing uselessly toward a never-ending inferno - of those ultimately responsible for the conflagration. Posits the rhetoric, in a keenly abstract way: Humanity is a terrifying thing without context…But then again, does context really make it any better? Maybe, as Herzog implies in one of the opening shots, we are indeed aliens on our own planet, oblivious to our damning, cyclic nature and content to swallow brutal truths if there’s a fitting narrative to help choke them down. My breath was taken away twice—once when barrels of dynamite are used to tamper a raging pillar of illuminated oil, a loud blast followed by the eeriest silence ever; and again when the workers are painstakingly replacing a valve and the soft, tender music abruptly cuts out to reveal the deafening sound of oil spewing out at unfathomable velocity—but my chest was tight the entire time.

A Brief History of Time