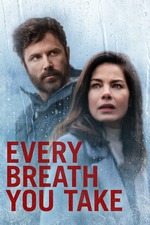 What exactly is going on with director Vaughn Stein? Though I haven't seen it, his short has some good reviews. But then every film since then has big name actors (Margot Robbie! Simon Pegg!) and one-star reviews. This is no exception. This is a dreadful film hemmed in by a low budget, a few locations, car-commercial shots of Range Rovers and such, dumdum dialog, lots of Monaghan swimming, lots of bad parenting, and a twist I saw right away when a certain book is ordered 10 minutes in. Dumb stuff. I feel dumber just having watched it.