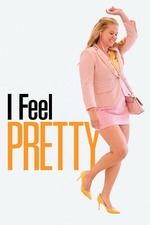 I want to recommend this to my film students as an example of how *not* to direct or edit comedy. Every time a laugh could have been wrestled out of a tepid situation, the scene cuts early. Every time a reaction shot could have been funny, they cut to something too soon. Add to that a premise that hasn't been thought out--her delusion in image is one thing, but why does she turn from a type B personality to type A? Why is she nice to her boyfriend but a mean-girl to her friends? And shouldn't a comedy end with a big comedy set piece? This ends with an inspirational speech about regular women having confidence...and that's why they need to buy budget cosmetics.

Was the Amy Schumer show written and performed by completely different people (including Amy?)

Saving graces: Michelle Williams' spaced out CEO (when's the last time she did comedy? Do more!) and Aidy Bryant wringing laughs out of nowhere.