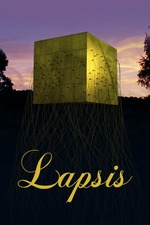 This reminded me of Abe Kobo's various satires of social groups such as The Ark Sakura and Secret Rendesvous: individuals tied into a work society with arcane rules and a subsequent fractioning of groups. The script is informed by Hutton's previous documentary work on big tech, big industry, and time. The work itself "cabling" is patently ridiculous, but the infrastructure around it (gamification, automation, absolute disregard for what makes us human) is not, and that's what made it very enjoyable, esp. when the film starts to show its pro-worker bias. I could not get past the fact that Dean Imperial sounds like James Gandolfini throughout, as he is playing a guy who worked up the ranks in "waste management", but he does make a likeable everyman, totally out of his depth in this job. I liked Madeline Wise too, who has one of those faces that make you think you've seen her in more things than she actually has (her other big role being a supporting character in Crashing, which I haven't seen). Though the film suffers from an anti-climax and a final act that its budget can't support, it is spot on about how late-stage capitalism is just a series of scams, from cabling to medical treatments to alternative therapies, and how we're kept in a constant state of anxiety, not wanting to get lapped by a little robot.