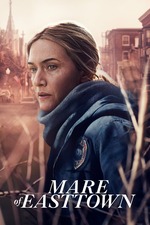 One of Kate Winslet's best performances, no? Just a bundle of repressed emotions in a broken working class town where everybody is covering for other people's problems (and crimes). A Delco version of the "it's grim oop north" British policier with cups of tea replaced with Rolling Rock and Wawa coffee. The various threads, red herrings, and such are all deftly handled, although the old "you're off the case" moment starts to hew close to cop show cliche. Jean Smart is fantastic as the mom, she's given so many good bits to keep humor in a show that is mostly downbeat. The romance with Guy Pearce's Richard is...okay? It serves to show a softer side of Mare, and Angourie Rice's Siobahn exists to show there is a way out of your hometown and that cycles don't have to be repeated. A good way to spend a month and a half of Sundays.