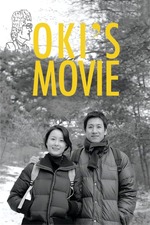 More enjoyable fractured realism from Hong. Despite being called "Oki's Movie," the film is made up of four "films" or chapters, the last of which bears the above title. Right there things get complicated. Are we watching the final thesis film of student Oki based on the films we saw before, or a film made by another student in the program (her lover Jingu). And that's not even considering the opening film that seems to take place after the following three.
While sorting all this out we have a love triangle between Jingu, Oki, and their professor Hong, plenty of smoking and drinking, furtive lovemaking, arguing, weirdly antagonistic relationships, and hilariously ironic usage of Elgar's Pomp and Circumstance over shots of garbage piles, broken planters, and rundown apartment hallways.
Hong Sangsoo supports the argument that artists should keep mining the same obsessions over and over again, because repetition is a form of change. However, he might be the exception to the rule.