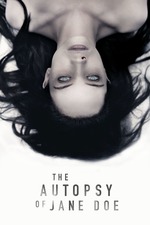 The Autopsy of Jane Doe

Effective, low-budget, one location, three-character horror film which unfortunately drops the ball in the third half, and then earns "the finger" for the final shot. (NO! Don't do it...ahhhhh, you did. Shame.)

On the other hand, and in its favor, is there any other horror film that has a father-son relationship at its core that isn't antagonistic? Nice economy of dialog and acting situate the two male leads early on, and the reveal of "Jane Doe" in dirt has something very primordial to it.

COULD have been good, but a whole bunch of poor and/or mediocre choices follow. Ah well.