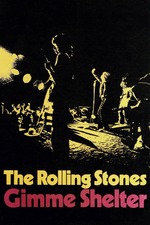 Altamont looms large in my personal mythology. My parents met at a party in Greenwich Village in 1969; my mother was living in San Francisco and could have gone to Altamont, although she didn't. They definitely chose the Stones over the Beatles in that particular battle for minds, though. I heard Their Satanic Majesties Request a lot when I was a kid. Add on a thick layer of Hunter S. Thompson, George R. R. Martin's Armageddon Rag, and whatever the hell that biography was that I read a million times before I was 30, and there it is: the moment a generation lost its innocence.

Probably wasn't really that, but even so, this was always going to be a tough watch for me whenever I finally felt like tackling it.

This movie felt like an electric current connecting two moments. The first is early: the Stones are listening to a mix of Wild Horses in Muscle Shoals. My romanticism says that I was watching five kids realize what they'd just made. It's wordless, mostly, and evanescently beautiful.

The second is also a reaction shot. If you've seen the movie, you already know which one. It's at the end, when Jagger sees the footage of Meredith Hunter being stabbed. It is also wordless, mostly, and not beautiful at all.

That current is grounded by reaction shots throughout. It's all in the expressions. The Maysles linger on faces -- both anonymous and famous -- time and again. Everything arises from and links those two moments. On the one hand, there's the eloquence of the music, and on the other hand, there's the violence that came along for the ride. It's not inevitable, but none of the Stones looked like they were enjoying themselves at all during the Altamont segment.

"We always have something very funny happen when we start that number."