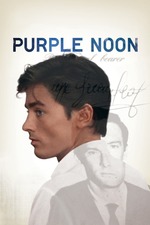 My, Alain Delon is pretty. Also quite good even this young. Tom Ripley isn’t an easy character to play, with that mix of boldness and self-loathing, and Delon did well with it. I know many critics think he’s a completely aloof Ripley but I disagree: the early scene where he’s trying to romance the woman in the carriage right alongside Greenleaf is the giveaway. He’s desperate to emulate Greenleaf. It’s further demonstrated in his anger when Greenleaf corrects him on silverware. Delon’s Ripley hates being poor, hates being stupid. That’s why he jokes about being clever.

Marie Laforêt, for her part, has an easier role in Marge but I thought she inhabited it well. It must have been an experience to see them effectively debut together.

Also beautiful: the scenery. There was a point where I was convinced the little Italian town was a matte painting because it was too perfect and too still. Nope, that’s just a slice of sun-drenched coast. Really the best parts of this movie take place in the sunlight, including the lengthy tense sailing trip.

I thought the movie decayed a bit after that trip. It was still tense, but in a punctuated way. Ripley’s first real crime is where all the built up tension explodes and Clément never quite winds it up to the same degree again, although he does stay nicely chilling.

I am also inclined to agree with Patricia Highsmith about the ending — you gotta embrace the amorality. So that’s a fault. Considered separately from the book, though, it’s a fine psychological drama.