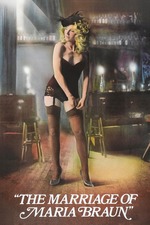 In which Fassbinder calmly slaughters a traditional melodrama, hollows it out, and wears it like a skin while savagely criticizing capitalist systems. What a scamp. He takes time to brutalize the oppressiveness of familial relationships as he sees them, as well, so no worries that he's missing his other favorite target.

I think there's some subtext here that's harder for me to appreciate, since it's a movie set in post World War II Germany. What does the American solider Bill mean to the original audience? Difficult for me to feel that emotional impact.

It's easier to assess what it means that Hermann Braun was fighting for Nazis. I think Fassbinder would tell us that there wasn't ever any core of pure love between him and Hanna Schygulla's Maria Braun. I think, also, that Fassbinder would say that West Germany's economic success in no way expiates the shame of national socialism.

It's remarkable how proficient this movie is. Fassbinder's understanding of camera angles and movements is marvelous. Credit is also due to Michael Ballhaus, who went on to work with Scorsese because Fassbinder was too much of an asshole to tolerate, but it's Fassbinder who understood how to frame every shot for brutal emotional impact.

And it's Hanna Schygulla who understood how to convey that impact. She transforms during this movie, more than once, and she's perfectly convincing at every moment.