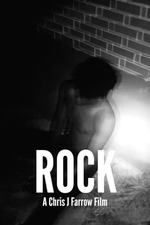 In an odd way, this has technically been a film I've been waiting for longer than any film before. The director responsible for this is someone who initiated something very important to me, which I absolutely cannot take for granted, and that is the rather large film community that I participate in on both Instagram and here on Letterboxd. Through Farrow's group chat, I met so many people who have inspired me to no end, and even some individuals who have become some of my closest and dearest friends.

That being said, I wanted to believe that Chris J. Farrow's debut would be an inspiration to us fledgling filmmakers who are still toying with ideas in our buzzing brains, watching films and taking mental notes constantly of what it is we love about film.

Sadly, this is most certainly not the case, as Rock is, to put it bluntly, an absolute mess. It seems as though Farrow had little to no vision for what this film would actually play out like for its runtime of roughly 88 minutes. To list everything wrong with this freshman effort would be an even greater waste of time than watching this movie, so instead I will just say that every aspect of the filmmaking process seems to have been transgressed by Farrow's insatiable need to reach a feature-film length.

So much of this film is painfully obviously unscripted, leading to long, and I mean LONG incoherent and repetitive rants about what the state of depression feels like. Depression, suicide, and mental health are all incredibly important topics, however, Farrow uses these themes as more of an aesthetic than a narrative device. This would be acceptable if his depiction of mental anguish was even slightly close to the reality that many people face with this issue, but instead, Chris Farrow has opted for a character who only describes his feelings verbally in the most inhumanely tedious fashion imaginable. I also had no idea until now that sleeping in a bathtub is a common symptom of severe depression.

Despite Chris' desire to share his creativity, he hasn't really created anything of substance here. Nothing provoked me to think or feel anything but boredom. Even for a film shot on an iPhone and created by a 17 year old, it is strikingly low effort, as many shots were clearly inserted as padding rather than to say anything meaningful (most egregiously, a 10 minute shot of a car window that ends with the driver clearly coming to a stop at a shopping center parking lot).

For a film that Farrow had supposedly been working on for months on end, Rock ends up feeling immensely rushed. Before Chris attempts his next project, I think he should take a long and hard look at the great films of the past and see what makes them appealing, as this film throws nearly all of it out of the proverbial cinematic window.