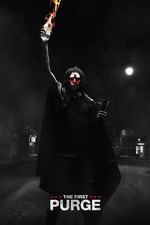 Wasn't expecting anything new or original. It's pretty straighforward in it's premise. An experiment that'll lead to the event later known as the purge.

The first movie was a great concept, but wasted in a boring and mediocre execution. The second one was the movie what the first one should have been. And I've never seen the third one.

This prequel doesn't tie anything together. There were some neat moments that could've sparked something great. But then it's wasted in a lousy execution. If you're the type that likes a jump scare every two minutes, than this is a movie for you no doubt.

To me it's a lazily written movie that doesn't offer anything new to this franchise. Go watch Hereditary or something else of better quality...