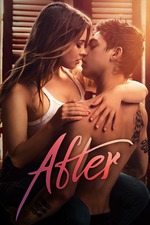 what a strange yet admirable little film. like Cruel Intentions or Twilight for the Billie Eilish & Juul generation; admittedly, that is my generation, and yes, a Juul is used within the first ten minutes. i read the After series when it was first published, and it’s weird to see an adaptation that is equal parts everything and nothing like the source material. gone is the explicit sexual content and downright abusive relationship of the original, for this film is much more focused on actually developing the bond between the two main characters, rather than constant fighting and melodrama. Langford plays Tessa exceptionally well, and Tiffin does his best to capture both the Harry of the fanfiction and the Hardin of the novels. it’s well-directed and shot, and the chemistry between the two leads is enrapturing to watch. quite obviously, it’s not a masterpiece, but it’s such an enjoyable movie that it’s hard to hate it. it’s shocking that this film even exists, but as someone who devoured all of these books some years back, i’m strangely satisfied.