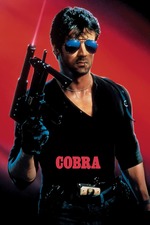 Little fun fact: here in Brazil, this film is called Stallone: Cobra. They literally just picked Sly's credited name in the poster and turned it into the title of the movie. I happen to think this is just wonderful.

Cobra is by far one of the best action films from the 80's. It's got it all: a badass motherfucking take-no-shit lead character played by the most goddamn ass-kicking fucker of all time, Sylvester Stallone; a beautiful chick; a merciless bloodthirsty mean-looking monstruous motherfucker for a villain; a fun partner; great 80's soundtrack; cheesy dialogue and glorious one-liners.

Marion Cobretti is simply the shit. If you're a dirtbag, he's bad for your health. He drops so many bodies and he cuts pizza with fucking scissors. Badass doesn't get any badder than that. He exudes testerone, just by watching him will make hair grow on your chest. I love the fact that Cobra is the peak of masculinity, but he's still got a slight female touch - starting by his name - and Stallone plays him perfectly. He never looks like he's trying to look cool, he just is. It's completely natural to him. When he drops a one-liner, he's simply speaking, and the words sound like pure badassery. Sometimes he even says stuff completely oblivious of how cool he is, and it's just great. But when he gets that mean, justice-seeking look in his eye, you know shit's about to get serious.

George P. Cosmatos is one hell of an action director, and this is definetely one of his best works. No one delivers a set-up montage like him. His camera is solid, it captures all of the masculinity being displayed and makes a fun ride of it. Cosmatos also takes a lot of notes from horror direction on the way he portrays the Slasher, our villain, as he is a menacing psycho straight outta 80's horror, and it works perfectly. When he comes out for blood, the adrenaline and the tension are off the charts, and everything from music to photography and masterful montage build a suspenseful atmosphere that's simply breathtaking. When the Slasher meets Cobra, it's like a pumped violent confrontation between horror and action cinema.

The photography is a lot more beautiful than I remembered; it constantly plays with hard lights and shadows to build constant tension, but also makes a great use of the warmest colors, mainly red. Red is always there, representing this violent, gruesome and broken world the characters are living in, and when the film ends, the aesthetic that we remember Cobra by is dark, shadowly and red. The aesthetics of violence.

The original score is very good; perfect during the suspenseful bits, also taking several horror cues, and though it's not so catchy during the action sequences, it still maintains great rhythm. The bands' songs are all 80's gold, for sure.

I just wanna take a time and stress how gorgeous and hot Brigitte Nielsen is in this movie. Seriously.

With great action, a lead character that's just the meanest motherfucker in town and good supporting ones, stunning looks, great soundtrack and marvelous one-liners that are the joy of any action fan, Stallone: Cobra is as high as 80's entertainment goes. Don't like it? Then you're scum, and he's gonna waste you.