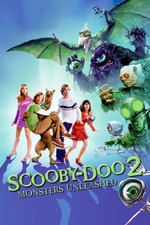 Neither James Gunn's writing or Raja Gosnell's (pretty solid) direction try to be anything near adult-like verisimilar, and both completely succeed at capturing the magic of a morning cartoon show. The Scooby-Doo original series had a very important meaning, that of which the real monsters are in fact human beings, and if the first film threw that to waste by making monsters real, this one recovers it by saying that monsters are only real when humans create them. Gunn's writing is the very soul of it, as it is unpretentious, innocent, heartful and fully committed to its characters; Shaggy and Scooby are pratically allegories to the film itself, as Velma states in a moment that their goofy way of being and their innocent humor are what makes them heroes, and she wishes she could be like them. Daphne, in counterpoint to her depiction in the cartoons, is a total badass instead of a damsel in distress, played by Sarah Michelle Gellar in all of her Buffy glory, and a kid who grows up with such a film - like myself - grows up with a strong female hero that teaches us that the most girly of girls can kick some serious ass. And our main male hero, Fred, teaches us that it's okay to be afraid. We don't have to force ourselves on being heroes, all the time. Whoever you are, however you are, you are a hero just by having the courage of being yourself. The ability to develop such a humanist speech with such innocence is what makes Scooby-Doo 2: Monsters Unleashed a true masterpiece of its kind, and it didn't need no 12 years to make.

It's a film for kids. The ones from back then, the ones from now, and the ones who still live inside of us. I will always love it.