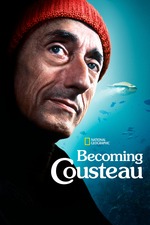 Award-winning filmmaker Liz Garbus (What Happened, Miss Simone?; The Farm: Angola, USA) set about making her latest documentary, Becoming Cousteau, upon realizing her young children had no idea who Cousteau was. Their understanding of underwater exploration and the importance of the ocean did not come via the recognizable Frenchman in the red beanie on the deck of the Calypso. It seemed unfathomable that such a giant figure in her life could be completely absent from theirs.

The resulting film, clocking in at just over 90 minutes, paints a picture of an intelligent man driven first by his need to explore Earth’s last frontier and then by a need to save it. We follow Cousteau from his beginnings as a pilot in the French Naval Academy to his introduction to free-diving as a way to recover from a major automobile accident to his final days as a proponent of environmental action and change. It delves into the personal cost of his devotion to the sea, while also spotlighting the fact it became a largely familial business.

Becoming Cousteau touches on the necessity of his many inventions, his pivot from successful films to hour-long television (the better medium to reach and educate larger audiences), and even on a time when he became so famous that he was listed next to the President as the person Americans would most like to meet. It leads us through his successes (the protection of Antarctica’s ecosystem via the Madrid Protocol) to his tragedies (the death of his second son Phillip, his unofficial successor).

Garbus doesn’t shy away from some of the questionable decisions of Cousteau’s early adventures, showing his dangerous diving tests (in one case fatal for a colleague), his deep-sea colonization plans and his affiliation with oil drilling in the Persian Gulf.

ThatShelf.com is using Letterboxd to share updates and lists with its audience. Join here.