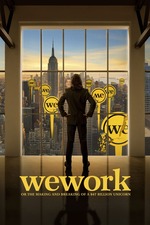 WeWork: or The Making and Breaking of a…

WeWork: or The Making and Breaking of a $47 Billion Unicorn 2021

The 2008 financial crisis nearly pummelled the global economy into oblivion. In the US, the federal government stepped in to stop the bleeding. The Obama administration brought the financial sector back from the brink with massive stimulus packages. After narrowly avoiding a second great depression, you would think that the government would put some checks and balances on ruthless corporations. That’s why the flagrant capitalistic hedonism depicted in WeWork feels so jarring.

Director Jed Rothstein’s latest documentary, WeWork: or the Making and Breaking of a $47 Billion Unicorn, examines the rise and fall of a company called WeWork (think of it as Uber but for office space). Fuelled by its charismatic leader, WeWork transformed from a promising start-up to a venture capital unicorn with a jaw-dropping $47 billion valuation. But the story doesn’t end there. WeWork’s questionable business practices and misleading accounting inflated its worth, making it only a matter of time until the bubble burst. And did it ever burst, leading to a colossal corporate flameout.

ThatShelf.com is using Letterboxd to share updates and lists with its audience. Join here.