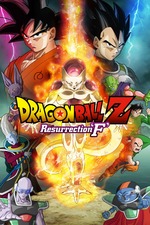 Lets delve into that cast. Its a fairly mixed bag in all honesty, like half of the cast here do fantastic jobs but the other just seem to half-arse it through the script. I mean Schemmel is going a really good job as Goku, he's got that childish charm that he's lacked in other movies as well as keeping the same prideful qnd serious nature of the character. However Sabat just seems to phone it in so hard as both Vegeta and Piccolo, playing the former with a really boring sense of arrogance and bitchiness that just isn't fun to watch at all. Todd Haberkorn is by far my favourite member of this cast as Jaco, he's this incredibly sarcastic space cop who basically turns up to take the crap out the side-cast and just wise-crack. Once again Douglas and Sinclair share some utterly fantastic chemistry as Berus and Whis, just a shame they don't get as much screen time as before. Chris Ayres is still the best voice Freiza will ever have in my opinion, he just captures that aristocratic and pompous tone perfectly with that faux British accent. The way he's just able to maintane this constant sense of anger is genuinely admirable, plus his sarcasm is on point. Jeremy Schwartz was excellent as Sorbet, he really nails the right hand man stereotype and gave me heavy Grand Moff Tarkin vibes. The rest of the side-cast, with the exception of Sonny Straits as Krillin, just kind of fail to put any real form of emotion into their lines so it comes across as if they didn't really connect with the script.

Now this theme of being a mixed bag continues throughout the whole film, the thing never really seems to find its feet properly and thus constantly keeps coming unstuck and revealing its short comings. For me at least this movie feels way too long for a DBZ movie, it comes in at just over an hour and a half which is longer than any of the other movies I've convered in this retrospective. But it just can't sustain itself for that length of time at all. It feels the need to drag out its fight scenes for longer than actually needs be by adding almost constant character interactions that just break the flow of the movie. That and there basically isn't a plot. The biggest sin this movie commits is basically just being an almost scene for scene rehash of the first Cooler movie, which I also remember being fairly average. But at least Cooler had some semi decent pacing and was about half of the run time.

The film's action and fight scenes are generally pretty good actually, much better than Battle Of Gods' in comparison. The cop chase with Krillin is one the suprisingly strong ones, its fast and snappy without feeling too brief plus its got a nice twist when you actually see its Krillin. Fairly funny too with the two criminals bowing down before Krillin and some breif slap-stick. The huge brawl between the Freiza Force and the Z Fighters is utterly impressive, its a perfectly paced fight which gives every participant a time to shine and show off their special techniques in some nice flashy scequences. The whole thing does feel a bit thrown together with how much it cuts between the different characters but it still works pretty well. I wasn't a huge fan of the Goku vs Freiza fight, honestly it just drags so so much as it feels basically the same as the Namek fight from the show yet it lacks the same stakes or sense of emotional weight. It does get marginally better after both characters transform to be honest and the Goku being shot from behind leads to one of my favourite Freiza scenes. The whole Vegeta vs Freiza fight is practically throw away as the stakes don't even matter at that point.

While the art and animation is just as crisp and slightly stiff as it was in Battle Of Gods, some wise guy decided it would be a good idea to heavily feature CGI in the fight scenes. God it just looks so cheap and nasty and actually ruins the flow of the latter half of Goku vs Freiza, why couldn't you just stick to 2D like with the previous movie or at least just rotoscope it.

Overall I'm failry dissappinted with Ressurection F yet it is exactly how I expected it to be. Its completely average in almost every respect from cast to fights. While not horrible to watch, its good is equal to its bad.