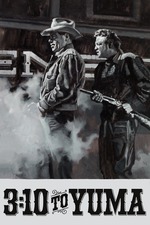 Like most people today, my first introduction to 3:10 to Yuma, which is based on an Elmore Leonard story, was through the 2007 film version starring Russell Crowe and Christian Bale. This 1957 Delmer Daves adaptation, however, is vastly superior in my eyes.

This adaptation is just as much of a character study as it is a Western, and the bulk of the film is restricted to the interactions of outlaw Ben Wade (Glenn Ford) and weathered rancher Dan Evans (Van Heflin) inside a hotel room in Contention City as they count the seconds until the arrival of the 3:10 afternoon train, which they plan to board as Evans escorts Wade to the Yuma Territorial Prison. 3:10 to Yuma features a handful of shootouts, but only enough to define these two lead characters through their actions.

Ford's Ben Wade is a ruthless murderer when the situation calls for ruthlessness, but he also has a softer side that he utilizes with ease to seduce women and to exploit the self-doubts of men who pose a threat to him. Like a personable, but shrewd car salesman who picks apart the weak spots of customers while befriending them, Wade compels us to let down our guard even when our logic warns against doing so.

Heflin's Dan Evans is a walking encyclopedia of insecurity and self-doubt, but circumstances allow his character to be mined down to an inner steel of resolve. We are constantly watching Evans being eaten alive with guilt when he actively considers Ben Wade's tempting offers, but we also see this guilt contributing to his stubbornness. By showing us how internal struggles can wreak havoc on an ordinary man who is focused on practicalities, Evans becomes one of cinema's most memorable heroes.

When it comes to the action sequences, Daves's direction works its true charm with shootout scenes that never leave us confused as to where the characters are situated or from where the threat is approaching. When the movie dwells on the beautiful vistas of the Arizona Territory, we are treated to some of the most picturesque scenes of any black-and-white western.